In 1914 Hampstead was no longer a separate village. The Ordnance Survey maps for 1894 and 1915 show that, in this 20 year period, the substantially undeveloped land west of the High Street, Heath Street and Fitzjohn’s Avenue and across to West End Lane had been intensively built up. Geographically it was rapidly becoming part of London. However it was still on the edge of London and relatively rural and Hampstead Heath was still used for grazing sheep. The opening of the Hampstead Railway (today’s Northern line) station in the town centre in 1907 made Hampstead more accessible and attracted more middle class City workers to make their homes here.

The population of Hampstead had grown to almost 90,000 residents, who needed housing, shops, entertainment and other urban services to support a steadily improving lifestyle.

Hampstead was a place of contrasts. Proximity to London and the attractions of a healthier life had always encouraged the rich and famous to live in Hampstead. People like the actor Gerald du Maurier, musicians like Sir Edward Elgar and Clara Butt and industrialists like Lord Lever. Side by side with this wealthy and cosmopolitan society Hampstead also had a large population of poorer inhabitants for whom life was difficult. 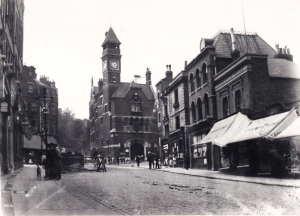 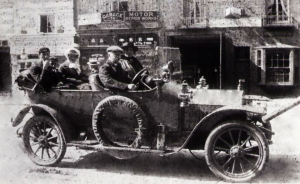 The streetscape was changing. The high street still consisted mainly of independent shops and horses were still in evidence pulling goods and carriages. However more motor vehicles were in evidence and new businesses were springing up to service them.

New technology was beginning to move into the home. While the Victorian era which had just passed was a time a technological innovation, new machines like the radio, telephone or gramophone were not yet in most homes. If you wanted to give someone a message you would still send them a postcard and the piano was still the chief form of home entertainment.

On 4th August 1914 England declared war on Germany. Hampstead was now on the Home Front! This was going to be the first foreign war that involved the whole population – both soldiers and civilians