Community@War » What was World War One really about

What was World War One really about

The balance of power in Europe since 1815 had been maintained by a series of treaties. But in 1888 Wilhelm II was crowned German Emperor and King of Prussia and moved from a policy of maintaining the status quo to a more aggressive position. He did not renew a treaty with Russia, aligned Germany with the declining Austro-Hungarian Empire, and started to build a Navy rivalling that of Britain. These actions greatly concerned Germany’s neighbours, who were suspicious of Germany’s intentions and quickly forged new treaties and alliances in the event of war. 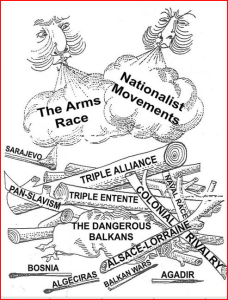 Germany feared encirclement by France and Russia and resented Britain’s naval supremacy. French antagonism towards Germany was driven by the humiliating losses of Alsace and Lorraine during the Franco-Prussian war of 1870-71. Russia and Austria-Hungary, both multinational empires with severe domestic problems, were at loggerheads in the Balkans, where Russia’s pro-Slav tendencies clashed with Austria-Hungary’s desire to curb demands for Slav autonomy within its borders.

Europe was divided by 1907, clearly if informally, into two military blocs: the “Allies” (Britain, France and Russia) and the “Central Powers” (Austria-Hungary, Germany and Italy). Both sides coveted the territories of the Turkish Ottoman empire. The scramble for new colonies in Africa and elsewhere contributed to the escalating Anglo-German naval race which, in turn, encouraged a general rise in military expenditure. The French, German and Russian armies all significantly increased in size during the early part of the early 20th century – although Britain’s political ambivalence meant it was left behind.

What sparked off the trouble? On 28th June 1914 Franz Ferdinand, the heir to the Austro-Hungarian throne, was assassinated by the Bosnian-Serb terrorist group Young Bosnia which wanted pan-Serbian independence. Franz Joseph, the Austro-Hungarian Emperor (with the backing of Germany), responded aggressively, presenting Serbia with an intentionally unacceptable ultimatum to provoke Serbia into war. Serbia agreed to 8 of the 10 terms but on the 28th July 1914 the Austro-Hungarian Empire declared war on Serbia.

This produced a cascade effect across Europe. Russia, bound by treaty to Serbia and unwilling to negotiate, declared war with Austro-Hungary and mobilized all its military resources. Germany declared war with Russia and ordered the mobilization of its armed forces. And France declared war with Germany. Germany’s army crossed into neutral Belgium in order to reach Paris, acting aggressively against any civilian resistance it experienced. This forced Britain to declare war with Germany because, in the Treaty of London in 1839, Britain had agreed to defend Belgium in the event of invasion.

Why did Britain fight? At the time the British newspapers declared our responsibility to help “gallant little Belgium”, and it was true that very many Belgian refugees came to London. But the reality is that Britain, as a major Imperial power, was threatened by what it saw as Germany’s Imperial ambitions and didn’t want to lose its colonies. Britain was also the premier global maritime power, protected by the Royal Navy. Germany’s naval expansion threatened our trade and commerce, as well as our food supplies. The British government believed that the threat had to be countered.

When war broke out in August 1914, the British army numbered just over 730,000 men. Unlike the other major European states, where conscription allowed huge numbers of men to be rapidly brought under arms, Britain relied on a small, professional defence force. But the scale of the conflict demanded massive increases in Britain’s military manpower resources. Our lack of preparedness relative to the other powers caught us out to begin with. But, by the end of the war in 1918, more than seven million men and women had seen service in the British army and another 2 million in other services.