Early life & family – Guy was born in London in 1865 into an artistic Hampstead family – a son of George and Emma du Maurier. His family had lived in Hampstead from before the 1890s – for many years at New Grove House (and still lived in the town at least until after 1934.)

Guy’s father George was a famous illustrator and author. He had three sisters and a brother, Gerald, who became a famous actor. One of his sisters, Sylvia, was later on the mother of the boys who inspired JM Barrie to write the story of “Peter Pan and the lost boys”. (Gerald played both Mr Darling and Captain Hook in the first London production of ‘Peter Pan’.)

Guy went to school at Marlborough College and then to the Royal Military College at Sandhurst. He was a keen rugby player and was a member of the Rosslyn Park Football Club that first started playing in a field that the club leased from a farmer in Gospel Oak.

He became a professional soldier – commissioned into the Royal Fusiliers (City of London) Regiment as a lieutenant in 1885 – and served in the Burmese and South African Campaigns. He was promoted to Captain in 1896 and Major in December 1900, and was awarded a DSO in October 1902 for bravery during the 2nd Boer War. He had command of a mounted infantry company. This is different from the cavalry, who fought on horseback, often with swords; Guy’s unit rode to battle and then dismounted to fight with carbines and bayonets.

Guy married Gwendolen Price in the summer of 1905 in Guildford and, for a time, they lived at 111 Church St., Chelsea. Like the rest of his family Guy was artistic. He sang and played the piano, and wrote a play called “An Englishman’s Home” (see text box). Despite its success Guy continued to be a professional soldier. He served briefly for 8 months as Assistant Commandant at the School of Instruction for Mounted Infantry in 1910/11 (the army was still training troops in tactics learned in the wide open spaces of the African plains), and was promoted to Lieut Col, 3rd Bn Royal Fusiliers (City of London Regt) in April 1911.

Guy’s play was produced and directed by his brother Gerald with the assistance of JM Barrie. It was so successful that it was staged in London in 1909 in two theatres at the same time. It was all about a family called the Browns that were faced with an invading force from ‘Nearland’, which everyone recognized as Germany. The hero was a Territorial Army soldier. The play was such a hit that a Territorial Army recruiting post was stationed outside the theatres to sign people up for the Territorial Army. The play was made into a film in 1914.

War service– When war was declared Guy’s battalion was stationed in India, from where it returned in December 1914. It was attached almost immediately to the 85th Infantry Brigade, 28th Division, and moved to France, arriving there in January 1915.

Guy’s brigade was temporarily transferred to 9th Brigade, 3rd Division on 17 February, to provide additional support after a gruelling defensive winter campaign. This had included the use of mines by the Germans in December 1914 to destroy British positions in advance of an attack. The opposing front lines were fairly close together here, and the tunnelling war began in earnest – with the first British mines blown under Hill 60 on 17 February 1915 by Royal Engineers from Guy’s own division. After this the underground war escalated rapidly.

When Guy went to France, his wife joined up too! She enrolled in the French Red Cross and became a canteen worker, providing comforts for French troops in hospitals and on leave in England. She even won a special Red Cross medal for it. 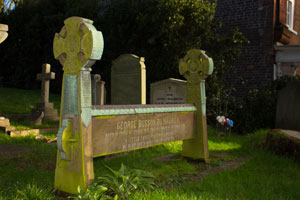 Death & commemoration– Guy was killed near Ypres on 9/10 March 1915 (age 49), after many years in the army but only 3 months on the Western Front (see London Gazette 18 June 1915). A shell hit where he was standing in the trenches. He had ordered his men into the dug-out and was checking that everyone was safe when the shell landed.

Guy is buried at Kemmel Chateau Military Cemetery (grave ref: L4), and is commemorated on the family grave in the Additional Burial Ground at Hampstead Parish Church (grave reference: I bay)(see photo on the right). Because of his association with the theatre Guy’s name is also on the war memorial outside Drury Lane Theatre.

Click here to see a photo of Guy Du Maurier