Hampstead in 1914 was a very different place. This section encourages children to close their eyes and imagine how the sights, sounds and smells of the street in 1914 differed from what they see, hear and smell in the street 100 years later.

Shops looks at the different shops they would have seen.

Traffic – horses and cars looks at a time when there were few cars or trucks on the road; instead children would have experienced the sight, sound and smell s of horses in the street.

Street traders were a regular sight in the streets, each with his own street call.

Air raids and dark streets describes the impact of zeppelins and other air raids.

A Tour of New End

This is a teachers script for a tour of the area of New End in Hampstead. It is a chance for children to be street detectives and to imagine what it was like to be poor in Hampstead in 1914 and to find out more about the area around New End. 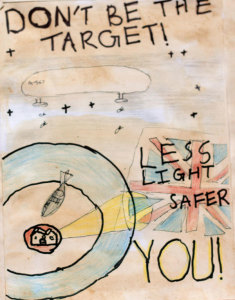 They also created a Zeppelin raid story entitled “ ‘Blackout Breakers’ ! Last night at around 7.00 pm a boy was killed by a shell while sheltering under a table. The disaster occurred… in a blacksmith’s shop. Two boys were shining torches at a Zeppelin. The Zeppelin dropped a bomb near the blacksmiths and killed Sidney his apprentice. The witness Alistair George Davies told the London news ….’I was near to that blacksmiths and next door the other boys were shining flashlights at a zeppelin. I like didn’t get it. Why shine lights at a zeppelin? I saw a hatch from the zeppelin opening and something fell out. I saw an explosion and smelt smoke. I just ran over to the building. I saw a dead body in the rubble. The fire was moving! I just ran…..Citizens are reminded to turn off their lights in blackouts. It ensures the enemy can’t target us.”

Horses and particularly the plight of old horses having to do all the work because young horses had been sent to the Front was another popular topic. Year 6 at Christ Church were reading ‘War Horse’ by Michael Morpurgo in their Literary Class. Sophia wrote “As I walked up and down the street my master whipping my back, I realised this was going to take a lot of getting used to. The sound of cars and men stomping their scruffy boots, ordering horses to follow them up here and down there. There was always the clattering of cars breaking down and swerving to the side, inches away from hitting you; while others ignoring the speed limit. Officers were attempting to stop them – fining them – as if it was even possible.

Not knowing how to drive and getting away with driving freely since you didn’t need to pass a test….while impatient drivers crashing and causing accidents on the road, that wasn’t pretty. 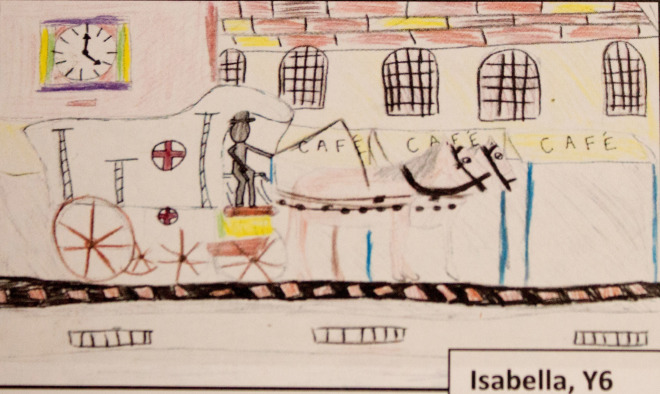 Car fumes were suffocating me as if my head was about to burst; bulging with exasperation, rubbish scattered everywhere…..

The clearest water for miles was Whitestone Pond, where my master would let me drink from every once in a while, with the other crippled horses. Most of them were badly injured some with broken backs due to pulling heavy wagons day and night having more and more coal loaded on every minute of the day. Legs unsteady barely even able to hold their own bodyweight. Legs also swollen from being forced to walk long than they could manage…..

Backs were bleeding from whips being slashed across the back just for not being faultless. Every once in a while a horse would get the pleasure of seeing another horse master being arrested by an officer for being cruel to a horse as it was an offence. As for the smell you could hardly ever find a street smelling normal because of horses leaving droppings in almost every single street; to be honest the smell was nauseating. Absolutely repulsive (in my opinion anyway).

The Clock Tower at the top of the High Street fascinated a lot of the children. It has served many functions – police station, fire station and look out post during WW1 and today the top is missing! We don’t know how this happened 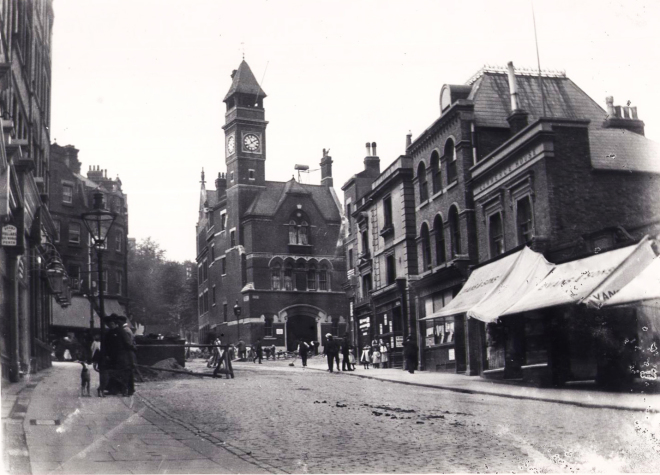 Year 4 at New End had a possible explanation for the missing top in an article entitled “’Nincompoop – who did it?’ To begin with locals thought it was a German Zeppelin; but after more investigation it has been revealed that a member of the home guard in Hampstead is to blame! On the 20th September a warning missile was fired as the gentleman, Jack Marshall, posted at the top of the tower believed he had spotted a Zeppelin. Unfortunately the missile not only warned locals but shot the roof off. The roof then fell on the nearby Hampstead Parochial School!

‘Is one of ours a jerry’ a local joked.

Both the clock and school were blocked until 1.00 pm; repairs are expected to take two weeks. Marshall has still not been found!”