After war was declared there was a new fear – the fear of attacks from the air. The newspapers reported on enemy raids with details of the extensive damage to property and the deaths they caused, and this had a big impact on everyday life. The biggest fear was a Zeppelin bombing raid. Zeppelin pilots navigated by using the moonlight reflected from the River Thames and from railway lines, as well as the lights from street lamps, houses and businesses. To increase public safety the government introduced the “black out”. Windows had to be covered and the streets were dark, which meant that people were scared to go out at night. The first Zeppelin raids were in 1915 and they continued until 1917. 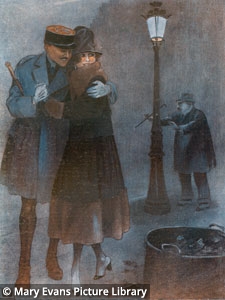 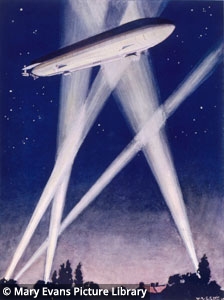 The first enemy raids in the UK were in Jan 1915 and showed government how vulnerable civilians were. Lighting Regulations were brought into force that required people to cover their windows and prevent light coming through the windows. It was called the ‘black-out’. These regulations also included banning vehicle front lights and street lights. So you would have to drive or cycle in the dark with no lights on in front of you to guide you, although you did have to have a tail light so no-one would run into you. And if your door bell went after dark you had to turn off the light in the hall before opening the door. Would you do that if it was dark? Or would you want to know who was there first?

At Hampstead Parish Church it was difficult to cover the windows so the times of evening services had to be changed so they could take place in daylight. The vicar also said that the darkened streets had reduced the number of people he could visit.

The black-out affected businesses, especially in the winter months when the days were shorter, because shop-keepers couldn’t light their windows to show customers their goods. And people didn’t like to go shopping if they had to return home in the dark with all their packages. As a result, the government introduced British Summer Time during the War to give more daylight hours for working.

It was a criminal offence to break the Lighting Regulations and show light into the street. People were regularly being brought up before the magistrate for this crime. One lady (who was probably a repeat offender) was fined £3.00, which is equivalent today of around £250.00! So it was a serious offence.

Imagine the black-out and dark streets

It might have a felt a bit like being deep in the country with only the moon and stars for light, except that there would have been other sounds which would have felt quite scary. Sounds like footsteps, opening and closing doors, and things rattling in the wind. You also hoped people wouldn’t be out on their bicycles or cars because they wouldn’t be able to see where they were going. There were regular letters to the Hampstead and Highgate Express from residents of Hampstead complaining about hazards on pavements which caused people to trip and injure themselves. In Jan 1915 these included debris from a gale that brought down large trees in Frognal, Lindfield Gardens and Willow Road, and a shop blind in the Finchley Road.

But sometimes people had to go out, and it must have felt quite dangerous. The Hampstead and Highgate Express on 1st January 1916 reported

‘… there have been several serious motor accidents due to darkened streets leading to fatalities..’ and on 6th January 1917 said ‘.. Darkened streets have been fatal to many pedestrians and helpful to the evilly disposed …’

Zeppelins were huge airships invented by Count von Zeppelin in Germany, and were originally used for tourism. People could float above towns and cities and see what was happening below. When war was declared they were adapted for a different purpose – to drop bombs on civilians. The first airship floated over London in 1915, dropping incendiary bombs from just a few hundred metres overhead. They killed a many people and caused huge fires and a lot of damage.

The Zeppelins were huge and very frightening. At first the British airplanes couldn’t bring them down because they couldn’t climb high enough. Finally in 1917 the first Zeppelin was brought down.

‘…there was this Zeppelin just hanging there, and that awful throbbing sound they make….Oxford Street was crowded, people just looking up, open-mouthed, staring. And suddenly it caught fire, a great whoosh of flame all over it and everyone cheered…..There were people cheering all over London…’

Because of the news of the death and destruction caused by Zeppelin raids, people in Hampstead would have been terrified of them. Have a look at the Zeppelin Raid Map to see where the raids occurred. You will see that, while Hampstead wasn’t bombed, the raid on 8th September 1915 flew over Hampstead and the three raids on 13th October 1915 might also have been seen by people in Hampstead.

In the book ‘Hampstead Memories’ one person recalls –

“…one of my earliest memories was sitting on my mother’s lap on our cellar steps during a Zeppelin raid..”

Another person, Dorothy Baker, who lived near Parliament Hill Fields during the War, recalls –

“…One night my mother held me up to the window to watch a Zeppelin coming down in flames……The sky was radiant as day, and the great ball of fire slowly crumpled and sank down to earth. I was terrified and sometimes wonder if my horror of fires dates from that moment…”

Watch a scary video of YouTube describing how Londoners felt about the Zeppelin bombing raids.

Or see this link with more information on the history of Zeppelins.

The sights sounds and smells of an air raid

If there was a raid there would be the sounds of the air raid warnings, the anti-aircraft guns trying to bring the Zeppelins down, and then the bells of fire engines coming to put out the fires. There would be the sight of flames and damaged buildings, and the smells of burning and of fear. And, if the raid was nearby, you might see the huge bulk of the Zeppelin air ship above you. (Have a look at the image on the right.)

The first air raid warnings were very ad hoc – in the beginning a Boy Scout cycled around blowing a bugle! Later the authorities erected illuminated signs on lamp posts which would be operated by policemen on duty. These said ‘Take cover’ when there was a raid and ‘All clear’ when it was over.

To defend Hampstead there was a huge anti-aircraft gun at the flagstaff site near the Whitestone Pond. At night the gun fired with a brilliant, pale blue light and the children called it “the pale blue gun”.

The authorities provided a list of places where people could take cover if they were away from home during an air raid. These included the public library on Arkwright Road (now the Camden Arts Centre) and the tube stations at Hampstead, Belsize Park and Chalk Farm.

Below is a description from the Hampstead & Highgate Express on 10th November 1917 of a rather ingenious, although one suspects a very noisy, vehicle, created to provide a unique type of air raid warning.

‘The North-Western Auto Car Company in Downshire Hill has placed at the disposal of the Hampstead Police a large motor car, upon which they have rigged up some admirable devices to be used as a warning in the case of air raids… At the front a large triangle is lit up in red with the words ‘Take Cover’. There is another notice on the rear. A whistle is attached to the exhaust to sound a blast which can be heard for two miles. As the garage is only a few yards from Hampstead Police Station, in the event of a raid it will take up position and a 30 second blast will be sounded on the whistle. It will then be driven over the borough sounding the whistle as it goes. Once the all clear is given it will resume its journey sounding a two note bugle call…..’

D H Lawrence and his wife Frieda lived in the Vale of Health for 6 months in 1915. In his book ‘Kangaroo’ (published in 1923) he gives a vivid account of the first Zeppelin raid on London in 1915, which he saw from Hampstead Heath.

Originally the outer layers of the Zeppelin were made using the skin from cows’ intestines, because it was tough enough to protect the gas bags inside. How many cows do you think it took to make a Zeppelin? [For the answer click here.]

Chapter 3 of ‘Wartime Camden: Life in Camden during the first and second world wars’, compiled by Valerie Hart and Lesley Marshall, London Borough of Camden, Libraries and Arts Department, 1983