Not all traders had a shop that you could go to. Many, like the costermongers, did their selling in the street. Older Hampstead residents can remember food sellers like the muffin man, the French onion seller and people who sold eels or shell fish. There were also tradesmen offering to do work, like the chimney sweep; or to buy your rubbish and old pots, like the rag and bone man. Each had a specific call so that you would know they were coming and this added to the excitement and bustle in the street. 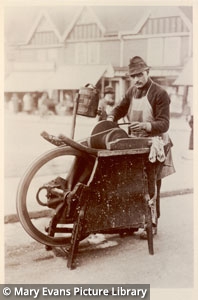 Costermongers were street sellers who made their living by selling fish, fruit, and vegetables in the streets of London. They bought fruit and vegetables in the wholesale markets and then pushing a barrow would go through the streets trying to sell their wares. A few of them had stalls in one of the markets – places like Covent Garden for fruit and vegetables, or Billingsgate for fish, or in local markets like the one in Queen’s Crescent, Kentish Town. These were the more successful costermongers. The poorer ones tried to make a living by pushing a barrow round the streets and selling to customers at their homes.

Henry Mayhew (in his book ‘London Labour and the London Poor’) describes a scene at a street market on a Saturday night after people had been paid. They had money to buy food and all the costermongers competed for their custom, calling out what they had to sell – ‘Chestnuts, a penny a score’, ‘Three a penny, Yarmouth bloaters’, ‘Now’s your time, beautiful whelks a penny a lot’, ‘Penny a lot, fine russetts’, ‘Come and look at ’em, here’s toasters’ (that is bloaters, again). ‘Ho! Ho! Hi-i-i. Here’s your turnips.’ Try saying these calls quickly!

Trade was often seasonal so this was a hard way to make a living and, on wet days, the costermongers were unlikely to sell much. Below are descriptions of some of the more colourful costermongers who residents remember seeing around Hampstead.

People in Hampstead remember the Muffin Man coming around the streets on a Sunday morning ringing his bell and encouraging you to come out and buy his muffins. His tray of muffins was covered with a green baize cloth and he would balance it on his head (see the picture on the left above).

He was a big favourite with children, who used to sing a song about him –

The rag-and-bone man collected unwanted household items and sold them to other merchants. Traditionally this was a task performed on foot, with the scavenged materials (which included rags, bones and various metals) kept in a small bag slung over the shoulder. Some wealthier rag-and-bone men used a cart, sometimes pulled by horse or pony. His cry was something like – ‘Anyolironrabo-on-ne’. What do you think he was saying? Children remember him giving them a goldfish in a bowl if they found him something valuable.

Unwanted items might include rags, bones and metal such as old pots and pans. Rags were sold for rag paper, or made into rag carpets or used to stuff mattresses or cushions. Bones might be sold to be turned into knife handles, toys or ornaments. Grease could be extracted from bones and turned into soap. Old metal was the most valuable because it could be sold to a metal merchant, melted down and reused. The rag and bone man might also search peoples’ rubbish or see what he could find discarded in the street. People who visited the rag and bone man would complain of the smell from all the rubbish in his yard!

Onion Johnnies were farmers and agricultural labourers from Brittany. They could have sold their produce in Paris, but the roads and the railways in France were bad in the 19th century and early 20th century and going there was a long and difficult trip. Crossing the channel on small sailing ships and steamers to England was shorter and easier. However the trip could be dangerous. In 1915 seventy Johnnies died when the steamer SS Hilda sank at St Malo.

Onion Johnnies typically wore berets and stripped shirts and often rode around on bicycles hung with onions plaited together in “ropes”, selling their distinctive pink onions door to door.

The name “Johnny” comes from the English townsfolk, who saw the sellers in the street and used the most common shared Christian name – “ Jean” for the adults, John, and “Little Jean – Johnny” for the youngsters. Women also came to sell their onions, and they were called “Onion Jennies”.

In 1914 most people still had coal fires. One of the problems with coal fires is that soot gathered in the chimneys. The soot had to be swept out, otherwise it could fall down the chimney and dirty the carpet, or worse, if it dropped when the fire was lit, it could burn holes in the carpet. So people needed to use a chimney sweep to clean their chimneys. Chimney sweeps would go through the streets calling “sweep, sweep” to try and attract business. However, customers didn’t like to have dirty sweeps in their houses when they were around, and so often the sweeps had to work at night or very early in the morning to avoid disturbing the residents.

Work was largely seasonal, because you can’t sweep a chimney when the fire is alight! So many sweeps didn’t earn much money. But some had regular businesses and customers would call them to come and sweep their chimneys. There was a well-known family of chimney sweeps in Hampstead – the Kippins. They had premises in Perrins Court (where the Villa Bianca is now) and you can see their cart in the grounds of Burgh House.

One of the Kippins, Henry, lived with his wife Nellie and their two children in New Buildings, off Flask Walk, very near New End School. He went to the war and returned safely. You can see his name on the memorial to all the residents who fought in the war on the side of New Buildings.

Find out more about chimney sweeps and the Kippin family by clicking here.

People also remember Bert Matthews, the Pearly King, who on Sundays would wait outside the White Bear pub or the Flask pub in Flask Walk and sell shrimps and prawns. Find out more about Bert Matthews (who was also the local rat catcher) here.

And then there was the “cat’s meat” man from Kentish Town, who sold cat food. He had pieces of meat on wooden skewers, which the cats used to love. No need for him to call out; the first cat to smell him sent the message down the road!

The knife grinder with his cart and sharpening wheel would also be around (see the photo above). Shopkeepers like butchers and grocers would be very pleased to see him and so would cooks because they would all need their knives sharpened. Read a poem about the knife grinder.

Effect of the War

What happened after War was declared? Many of the able bodied men volunteered or were conscripted and went off to fight, leaving the older traders to ply their trade. Some, like the Onion Johnnies, disappeared because it would have been harder and more dangerous for them to cross the channel. And their produce would have been needed to feed the men fighting in the trenches.

Instead of the rag and bone man, the Church Lads Brigade began a regular waste paper salvage service. From December 1914 householders and businesses could contact the CLB leader at his home in Redington Road to arrange collection. By the end of the War everyone was saving and recycling. The official Salvage Committee organised collections of useful materials every Monday afternoon – and especially wanted rags. And trams were fitted with canvas bags to collect used tickets.

For images of street traders, including the Rag and bone man, have a look on Google Images http://www.google.com/imghp