After War was declared, and as it progressed, the street scene changed. As most of the young men went to fight at the front, women were now seen doing jobs previously done only by men. People who were nationals of countries that Britain was now at war with were classed as ‘enemy aliens’ and moved to internment camps until after the War. Their roles also needed to be filled. 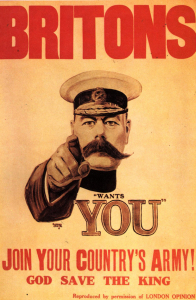 Young men were being encouraged to join the army in their thousands, encouraged by posters like the one above on the right. This meant that there were fewer young men in the street or working in shops and offices. (Read more about young men signing up for the army and going to fight in the topic ‘Local regiments – recruitment and training’.) Taking increasing numbers of men and boys out of the workforce created gaps in daily life that women had to fill.

Women weren’t allowed to vote in the period before the War, and many campaigning for the right to vote (“suffrage”) were called Suffragettes. In the months leading up to the outbreak of War groups of suffragettes did lots of things to bring their demands for the vote to the attention of other people, such as going on protest marches. However at the outbreak of the war The London Society for Women’s Suffrage announced that it was going to suspend its political activity and use the skills and experience of women to support the war effort. They went on to open workrooms and a cheap restaurant for unemployed women (Dec 1914).

Before the outbreak of World War One the number of occupations open to women was very limited. But they were soon playing a vital role in the war, not only as nurses and ambulance drivers but also other jobs previously only done by men. These included delivering the post (see the picture above on the right) and acting as ticket collectors on buses and trams. They acted as porters, operated signals on trains, cleaned windows, and in 1917 the Willesden Council advertised for women to do the work of rubbish collectors.

Women were also needed to work in munitions factories to produce ammunition for the Front. This was very dangerous work. However many of the women who worked in the factories had previously been housemaids; factory work was better paid and they had regular time off. (Do you think they ay have changed their minds in September 1915 when the government introduced night shifts to increase production?)

In addition, businesses in towns needed clerical workers to do work previously done by men and there were notices in the papers encouraging women to acquire the skills needed to work in an office.

An article in the Hampstead and Highgate Express in January 1917 said …’the call for skilled workers to take the place of those serving with the forces becomes more and more insistent as time passes. In the clerical staff of large business houses, banks and public offices, the shortage has for some time past become a serious problem, and on a broad ground of national necessity alone….it behoves all who can possibly do so …. to play a useful part in the present time of need…for example shorthand, typing and bookkeeping….’ 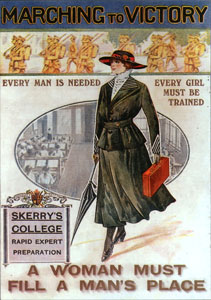 Posters like the one on the left encouraged woman to do training courses so they could fill the roles previously done by men. It became a woman’s moral duty!

And in industrial and agricultural areas women were needed to do more physically demanding jobs, like ship building and working on farms as land girls.

Although women were already training as nurses, many more women were needed in this role as the War continued. Read more about this in the topic ‘Support for wounded soldiers in Hampstead’.

While some of the new roles were paid jobs there was also an urgent need for women to fill voluntary roles. For example, in 1915 the Women’s Reserve Ambulance (WRA) was set up and requested volunteers to ferry patients between hospitals. This need is highlighted by an advert in the Hampstead & Highgate Express in January 1916 offering cheap driving lessons to women as an inducement.

All desirous of assisting this country during the present crisis apply to PG Motor Garage, High Street, Hampstead. Instructions in all branches of the Motor Industry. Special terms for ladies joining the WVR and WRA…Recruiting arranged on the premises.

Women were also needed on local committees to relieve distress – identifying employment opportunities for women seeking work, and co-ordinating the distribution of relief grants and food. This was particularly important for the wives and children of servicemen away at War. In Jan 1915 the Hampstead and Highgate Express reported that many of these families were starving because of the delay in receiving their husband’s war pay from the authorities. Relief was also vital in supporting the many Belgian refugees, the unemployed and mothers and babies. In total, there were about 2500 people in the borough receiving food aid in Jan 1915. 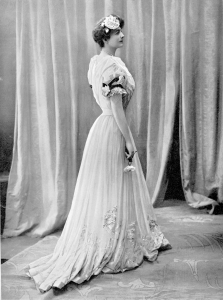 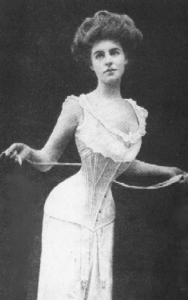 Another thing that changed for women was their clothing.

Before the War the fashion was for very tiny waists – see the photo on the left.

The photo on the right shows the very tight corset that a woman had to wear under her clothes to achieve this shape.

Imagine being strapped up like this all day; you wouldn’t be able to do much.

When the War came women needed to be able to move more freely to be able to take on new roles. They could no longer wear corsets and tight fitting, restricting garments. This was very liberating for women in general and had a strong influence on women’s fashion of that time (see the poster above). Before the war skirts came down to the ground. Women now started to wear shorter skirts (see the photo above of the postwoman), sometimes as much as six inches or more above the ground! And, in some roles, women started to wear trousers.

Because of the shortage of fabric the government encouraged wealthier women not to wear elaborate clothing. Government also advised women to dye their clothes and repair them, rather than waste money and resources on buying new clothes. It suggested that continually buying new clothes was extravagant and “bad form in war time”.

Some women put pressure on young men to join up. If young men were seen in the street and they appeared to be fit, people wanted to know why they were not fighting when their own fathers, sons, brothers and uncles were. Some women would hand young men white feathers to indicate that they thought they were cowards! Soldiers home on leave might have liked to change into their own more comfortable clothes but tended, instead, to wear military uniform when off-duty so that people in the street would know that they had signed up and were part of the fighting force.

Reports appeared in the Hampstead and Highgate Express of fights breaking out when men accused others of being cowards. For example –

On 8th January 1916…Thomas Thompson was fined £4 and £1 costs for assaulting Thomas Ambridge….while on a train Thompson called Ambridge a coward because he was not in khaki..he told him to mind his own business whereupon Thompson struck him on the mouth breaking 2 teeth and knocking out a third…

On 29th January 1916…John William Upton aged 21 was charged with drunkenness in High Street Finchley….He was said to have fought with another man while surrounded by a crowd. In his defence he said the man had called him a slacker which had upset him. He said he had been in the army and was discharged after being wounded in the arm. He was continuing to support the war effort by working in a munitions factory. The magistrate told him “The public respects a man like you, and why should you lose that respect by behaving like this…he was fined 5 shillings….

This problem increased as more men were discharged from the armed forces as invalids. By Oct 1918 the government had to produce a silver lapel badge for ex-soldiers to wear to show that they were honourably discharged from further service.

At the outbreak of the War many German citizens, even those who had lived in Britain for a long time and had families in Britain, were classified as ‘Enemy Aliens’ and sent away to internment camps until after the War. The government was concerned that they might want to help the enemy.

The public was worried about spies and very suspicious of anyone with a German name. The Hampstead and Highgate Express reported on 15th August 1914 that a cook who received letters in German was accused of being a spy. And on 5th December 1914 a short article in the Hampstead and Highgate Express noted that ‘…Doubts have been cast on the nationality of the members of the firm of Messrs Goldschmidt & Howland (the estate agents at the top of Church Row) …. Proceedings are pending in consequence. Both of the partners are British born subjects, and one of them in fact is now at the Front…’

Anti-German feeling got a lot worse after the sinking on 7th May 1915 of the British ocean liner RMS Lusitania. This was not a warship but ferried people and goods across the Atlantic Ocean between the United States and Great Britain. It was torpedoed by a German U-boat and sunk. Of the 1,959 people on board, 1,198 died, including women and children. After this some shops with German names were attacked, and some shopkeepers – even those who had lived in Britain for a long time and had become naturalized citizens – changed their name. For example, Rose Konig, a baker in Kentish Town, become Rose King.

In another case in West Hampstead a sergeant in the Special constabulary, who was of German descent, had served for 5 years in the British Territorial Force. When his co-workers objected to serving with him, on the grounds of nationality, the situation was only resolved after the Home Secretary was asked a question in Parliament.

Victoria and Albert Museum http://www.vam.ac.uk/content/videos/u/underwear-from-corsets-to-bullet-bras-and-back/A video showing the different designs for corsets and how they were worn. The first part of the video relates to the Edwardian period and changes in fashion after the War. You click on ‘view transcript’ to see at what point the video moves on to the Second World War.

Chapter 4 of ‘Wartime Camden: Life in Camden during the First and Second World Wars’ (see reference under ‘Sources’ below); under the heading ‘Anti-German feeling’ this book gives a personal story of someone whose father was classified as an enemy alien.

BBC – a presentation by Kate Adie ‘What did World War One do for women’ http://www.bbc.co.uk/guides/z9bf9j6

Imperial War Museum – podcast on ‘Women’s war services’ – there are also some interesting images that you can look at adjacent to the podcast http://www.1914.org/podcasts/podcast-30-womens-war-services/ .