Despite bombing raids, shortages of fuel and food, adults having to work longer hours and children missing members of their family at the front, people were determined to enjoy themselves. The Hampstead Fairs on Bank Holidays were popular with local people and attracted huge crowds from London who could get to Hampstead easily on the train to South End Green or the tube to Hampstead. Another time for having fun was Christmas. Generous local benefactors made sure that children from poorer families also had treats at Christmas time. 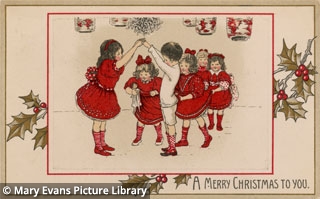 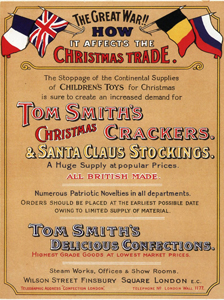 The Hampstead Fairs were very popular events on the Bank Holidays at Whitsun, Easter and in August. They were popular with local people and also attracted huge crowds from London who could get to Hampstead easily on the train to South End Green or the tube to Hampstead. There were donkey rides and lots of stalls. However the Hampstead Fair at Easter 1917 wasn’t much fun as you will see from the article below from the Hampstead and Highgate Express.

A snow storm at Easter…There were less visitors to the fair this year. In past years there have been up to a quarter of a million people according to estimates – now maybe tens of thousands and it was not as much fun as in previous years with so many young men at the front.

People were determined to enjoy themselves, even eating ice cream as the snow fell.

Young men were carefully scrutinised by the reporter to see if they were of call-up age.

There were fewer attractions compared to previous years. Only one coconut shy, skittles, hoop-la and darts.

There were a few itinerant fortune tellers and photographers – but the barrows bearing sweets, cakes, whelks, bananas and other articles of food were completely absent and the only hawkers were a few old men selling whips of coloured paper and then the blizzard came ….

Police controlled people going into the tube station – at times the queue went down as far as the brewery, a distance of about 300 yards – so the people in the queue kept themselves cheerful by singing and dancing to while the time away …

With food shortages and so many men at the front (who might otherwise have run stalls or sold food, or spent money) the fair was only a shadow of what it had been in previous years.

Christmas celebrations in 1914 were a little muted with so many men at War. There was an “empty stocking” scheme to collect toys and dolls costing 6 old pence (2½ in today’s money) for distribution. And there was special food and entertainment at the Workhouse, the boarding schools and the hospitals – for the children of servicemen as well as the children of the Belgian refugees escaping from the War who lived in Hampstead.

At Hampstead General Hospital, which had 120 sick adults and children, the Hampstead and Highgate Express reported on Christmas Day 1914 as follows –

What toys did children get for Christmas?

What types of toys did children play with in 1914? Have a look at the poster at the top of the right and below. The first thing to notice is that no more toys were coming in from Germany. Before the war a lot of the best toys came from Germany – particularly dolls, soft toys like teddy bears, and moving toys like cars, trains, planes and boats. 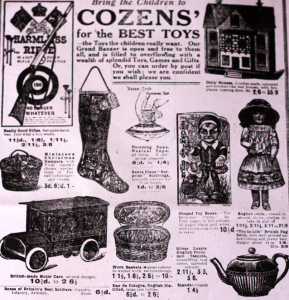 Once war was declared all that stopped. While English factories and workshops tried to fill the gap, many of the men who would have made the toys had gone to War. This meant that there was less choice than there had been. Certain toys became very popular during the war, especially with boys – like toy soldiers, model airplanes and other toys connected to the war.

The advert on the left is from the Hampstead and Highgate Express from this period, advertising a toy shop in the centre of London.

Many people in Hampstead wanted to make sure that all children, even those from poorer families, had a good time during the Christmas holiday. One such was the colourful proprietor of the Flask pub in Flask Walk, Mr Montague Rowland Fitzwilliam – “(his) ample proportions were always clad in spotless attire, including a starched wing collar and bow tie, invariably a colourful buttonhole adorning his lapel and the entire ensemble was crowned by a bowler hat..” The following article which appeared in the Hampstead and Highgate Express on 5th January describes his generosity –

….Upwards of 150 children residing in the vicinity of Flask Walk were on Tuesday the guest of Mr Montague R Fitzwilliam, mine host of the Flask Tavern, Flask Walk ….

The party an annual one was, as usual, an unqualified success. Santa Claus came. All the old party games were played, and the ‘blow outs’ one for each child blown out, and all the crackers cracked off. Then there was lots of milk, huge piles of cake, sweets, oranges, apples, nuts and all things nice. There was also bread and butter, but as the supply of cake held out right to the end, the guests unanimously treated it with well merited party scorn……Then songs to pianoforte accompaniment; and how the youngsters let the topical choruses go. “Smile, boys smile”* was perhaps the favourite, the children taking their cue from Mr Frank Fitzwilliam, who in the role of choirmaster was one vast expansive smile the whole time. Master ‘Edie’ (Mr Monty Fitzwilliam junior) also joined in.

But the greatest attraction, apart from the cake, was Jesson’s Royal Punch and Judy Show. Punch that great master of melodrama, surpassed himself for the occasion and the dog Toby was unquestionably the best Toby ever seen. How the children shouted and laughed when Punch settled the accounts of Judy, the beadle and the executioner; and how they cheered and screamed when the clown and Toby occasionally scored off him. The whole plot with its bewildering story line was covered, and when the curtain went down the audience was in a state of breathless exhaustion.

When the happy party at length broke up, Mr Frank Fitzwilliam, disguised out of all knowledge as Santa Claus, barred the way out! With him was Mr Monty Fitzwilliam, the younger, enveloped in Eastern atmosphere, and arrayed in the celestial garb of a Chinaman. As the guests filed past each was presented with a toy, a substantial one too, together with a bar of chocolate, an orange, and the wishes for a happy new year….

* This was probably the song ‘Pack up your troubles’ a popular World War One song. See more under Further Resources below.

Hantsweb set up by Hampshire County Council has an interesting page on the history of toys http://www3.hants.gov.uk/childhood-collections/toys.htm

Museum of Childhood – things to do http://www.museumofchildhood.org.uk/learning/things-to-do (This page tells you how you can make various toys including your own Punch and Judy puppets)

BBC – how did ‘Pack up your troubles become the viral hit of World War One’ http://www.bbc.co.uk/guides/z3ypr82?ns_mchannel=mec_ppc&ns_source=google&ns_campaign=bbcinteractiveguides&ns_linkname=interactiveguides_text_google_generic&ns_fee=1