In 1914 there were no electrical appliances to help with housework. People didn’t have vacuum cleaners, washing machines, spin dryers or electric ovens. Although gas was being used more widely, especially in wealthier homes, many people still used coal to heat their homes and for cooking. Coal was dirty and involved the housewife in a lot of extra work. Wealthier households could afford to employ people to help with the cooking and cleaning, but in poorer homes this was not an option. Unfortunately the supply of gas to homes was restricted towards the end of the war because it was needed in munitions factories. In 1917 there were even fears that gas supplies would run out. 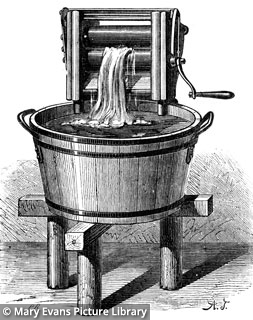 In 1914 many people still used coal to heat their homes and there was usually a fire grate in each room. It was a heavy job to carry coal to all the different rooms that need to be heated. Coal is very dirty to use and coal fires had to be cleaned out regularly to remove the ash from the grates. It was also important that chimneys were swept regularly by a chimney sweep otherwise they became smoky and hot soot could fall on the carpet. However the smoke from the fires would still dirty the walls, windows, curtains and your clothes.

In contrast, gas fires could be lit when they were needed and they didn’t produce the dirt of coal fires. But they were still a new invention in 1914 and not many people had them; most people used gas for lighting and, except in new houses, very few had electric lights until after the War.

Coal ovens or ranges needed to be stoked up, and the coals had to be hot before you did any cooking. It was difficult to control the oven temperature and, to make sure heat was available for cooking and washing, the fires needed to be kept stoked up all day. Cooking could be a very hot and tiring job. And the stove needed to be cleaned regularly to get rid of the ash left by burning the coal. Another dirty job! 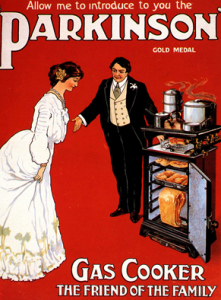 In contrast, some better-off households were beginning to use gas cookers, which meant that the housewife could turn on the oven or stove when she needed to cook.

The picture on the left is an advertisement from the gas company highlighting the delights of a new gas oven. There were regular adverts in the Hampstead and Highgate Express by both the gas company and a local electrical installer telling customers of the advantages of “modern” fuels – provided you could afford to have them installed!

Wash Day in the home

Because of all the work and fuel involved, washing the household laundry was usually done on a specific day and would probably take all day. 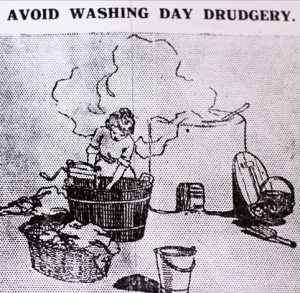 Often the poorer housewife, who could not afford any help in the house, would keep her daughter off school to help.

The stove needed to be hot enough to heat a big pot of boiling water for the laundry. Washing was done by hand using a wash board and a large bar of soap to scrub the clothes clean.

The picture above shows what hard work wash day was. It is an advert put out by the gas company to encourage people to change to gas. If you had a gas boiler to heat your water then you were saved some work, because there was no stove to stoke up or grate to clean out afterwards.

One local resident remembers the soap man – “….There was a soap man, Mr Mc Donald, who lived in Flask Walk.  He used to call early on Monday mornings with his cart laden with soaps – ‘Sunlight’, soda and the famous ‘Hudson Powder’ – so that the ladies could do their weekly wash…”.

After the washing was rinsed clean, the housewife used a mangle to squeeze out all the water from the laundry (see the picture at the top on the right). This device consisted of two rollers turned by a handle and was very hard work. Laundry was hung out to dry on a washing line and then ironed. Irons weren’t electric but had to be heated and reheated on the stove.

Many poorer households, who didn’t have the space or the facilities to do the washing at home, went to a wash-house to do their laundry, but the process was the same. (See Baths and Washhouses below.)

Here is a poem written by Jean Taylor published in the Nottingham Post 2009. It talks about ‘Blue Dolly’. Before we had modern laundry detergents there was a mysterious little blue bag which was stirred around in the final rinse water on washday to whiten laundry.

It’s Monday, get the copper on
Add the bag of dolly blue
All whites are going on to boil
It’ll be steam I’m looking through
Out of the copper and dolly tub
For the final, ponch and rinses
Cold tap running fast
Turning clothes with wooden pincers
All these preparations
Again and again
Hopefully we’ll get it done
Without a sign of rain
Uncover the mangle
Wipe down the line
Oh, to see the washing blow
Glowing bluey white
Prop at the ready
Hope it stays fine
It’s staying out till tea time
It’s ironing tonight
Things still damp
Get the clothes horse out
It’ll air off by the fire
All night
Getting the washing done
It was an all-day chore
Aren’t we lucky nowadays
You couldn’t ask for more.

The life of a housemaid

Because all the cleaning, cooking and washing was very hard work, middle class and wealthier households would often employ a cook and one or more housemaids to do it. People with less money might employ someone part time or in winter when there was more work because so many coal fires were needed. As Hampstead grew, and new houses were smaller, the opportunities for employment as a “daily woman” increased.

What was life like as a housemaid? Live-in maids had to get up early to stoke the fires, to heat water for morning ablutions and boil the water for morning tea and breakfast. Your many jobs would probably include cleaning the shoes before everyone got up; washing down the front steps; cleaning and lighting the fires in all the rooms. You would have a little time off in the middle of the day and maybe an afternoon off every two weeks. Living with the family you worked for saved you money, but you had to make sure you didn’t get home late.

However, as the war progressed and more men went off to fight, women were needed for other work. It became difficult to employ housemaids, so life became a bit easier for those who stayed. You can see this from the following advertisements which try to appeal to potential employees –

‘…Wanted girl about 20, for housework, general would suit; one other kept and daily woman for rough work; no windows, washing, steps or boots; good food and wages; outings half a day once a week, every other Saturday and alternate evenings till 10.30..’

‘…Good general servant to live in or out…’

Why might any of these jobs appeal to someone? Think about what the adverts say about the job but also what they don’t say, especially the last two.

Some poorer families lived together in larger houses. They didn’t have flats or apartments, just separate rooms. The family living in the basement or the ground floor might have a stove which could be used for cooking or on wash day, but the other floors just had open grates which were quite unsuitable for cooking. It was therefore very difficult for the poorer housewife to provide hot food for her family, she would have to carry coals up and ash down every day, and she had to go to the public baths to wash their clothes.

Some might be lucky if the family rented rooms in a house where gas had been installed, because then they might have ‘penny in a slot’ gas meters. Such meters could be attached to cookers on the upper floors which would allow housewives to cook for their family.

By 1914 a few wealthier homes in Britain were beginning to install bathrooms where the water was heated by coal or gas. These provided hot and cold running water for the bath and basin and had flush toilets – not unlike the bathrooms today.

However in 1914 a typical working class family lived either in a small workman’s cottages or in tenement blocks of social housing, like New Court in Hampstead. These had no bathrooms so a tin bath in the kitchen was filled from hot water heated on the stove and often several members of the household would share the same bath water. Poorer families who lived in rented rooms would use a lavatory shared with other families in the house. Their washing facilities would be limited and members of the family would probably go to the local Baths and Washhouses to bath – usually no more than once a week or less frequently.

Local parishes in England raised money to provide public baths and laundries. In view of the rapidly expanding urban population, often living in most insanitary conditions, bath-houses were seen as essential public services. 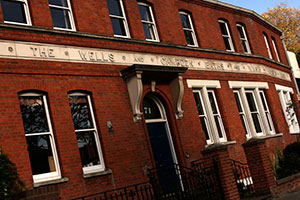 The Wells & Campden Baths and Washhouse in Flask Walk.

This facility was opened in September 1888 by The Hampstead Wells Trust to provide for local residents.

The Wells and Campden Bath and Washhouse was used by local people, many of whom lived in Flask Walk, the New Court tenement buildings or the local workman’s cottages. The Superintendent lived on the left hand side of the building and the right hand side was the washhouse and the bathhouse.

When it opened in 1888 cold baths cost one old penny, a hot bath cost tuppence (2 old pennies), and there was an extra charge for first class cubicles. The use of a laundry tub and drying facilities also cost tuppence. We have no record of how much was charged in 1914, but we know that in 1905 the bathhouse was running at a loss which is why the local Council took over the running of the building.

Towards the end of the war, particularly by 1917, there were concerns that the supply of gas could run out. Fuel shortages during the War meant that priority for supplies went to factories doing “War work”. Even some bus routes were curtailed at week-ends. Adverts appeared in papers encouraging people to ‘Use gas economically’ One suggestion was ‘…use one gas ring instead of 4 by using a small hot plate over a ring to distribute heat to a wider area..’. A good idea we could use today. Fortunately, however, fuel rationing was never introduced.

The chimneys of the bathhouse at one time were swept by Henry Kippin aged 29. Find out more about Henry Kippen on the Tomb with a View website.

An elderly local resident tells the story of how one young girl, whose parents had a bathroom, saved up her pocket money so she could go to the bath house with her friends because it sounded so much fun.