Children from poorer homes didn’t have much leisure – they had to help at home and were often in employment by the age of 14. But younger children had to learn to entertain themselves. Their father was either away fighting or working longer hours because of the shortage of staff, and their mother was working or doing voluntary work to support the war effort. There were no TV’s, videos, or computer games to keep them amused. Often children played in the side streets as there was little or no traffic in them – not like today! Playing games also helped to take children’s minds off their father being away fighting or the fear of air raids at night. 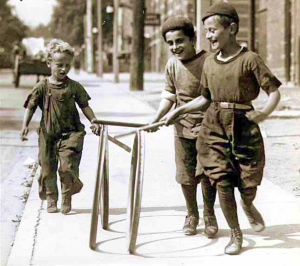 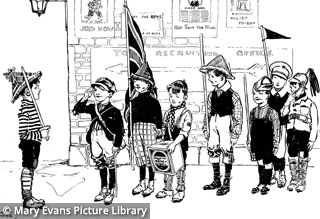 Singing together was a popular pastime for all children. Children from wealthy families might well learn to play a musical instrument and might even have singing lessons. They would then be encouraged to play, or sing or recite at family musical evenings.

Children for all backgrounds also played singing games many of which were based on nursery rhymes, many of which were centuries old. Although they may sound nice today many of them have rather unpleasant origins. Like ‘Ring a ring a roses’ which goes back to the time of the big plague which killed lots of people in London in the 17th century. One of the first signs that a person had the plague was a rosy rash, and then sneezing and then, as the rhyme goes, they all fell down. Watch another school playing this game

Ring-a-ring o’ roses,
A pocket full of posies,
A-tishoo! A-tishoo!
We all fall down

Or ‘Oranges and lemons’ – this is also a rather sinister song. It goes back to the 18th when people used to be hanged publicly. The bells refer to church bells around the City of London. ‘Here comes a candle to light you to bed’ refers to the poor prisoner being told the night before that they would be hanged the next morning after the ringing of the execution bell!

Oranges and lemons,
Say the bells of St. Clement’s.

You owe me five farthings,
Say the bells of St. Martin’s.

When will you pay me?
Say the bells of Old Bailey.

When I grow rich,
Say the bells of Shoreditch.

When will that be?
Say the bells of Stepney.

I do not know,
Says the great bell of Bow.

Here comes a candle to light you to bed,
And here comes a chopper to chop off your head
Chip Chop Chip Chop
The last man is dead!

The games involves two children who are the “chopper” forming an arch with their arms. The other children run through the arch, singing the rhyme as they go. The song ends with the words “chip, chop, chip, chop the last man’s head” and at that point the “chopper” is brought down and the child caught in it is out and must choose to be an orange or a lemon. When everyone is out, the oranges have a tug-o-war match with the lemons.

Card and Board Games

Boys would play marbles and were very proud of their marble collections which would differ in size and colour. They would often swap them with each other. The game would involve flipping the marble with their first finger against their thumb and score if they got a marble into a gully. A manhole cover would often be used as it had dips in it. Watch a YouTube video explaining the rules of marbles.

Children also played with hoops. There were wooden ones in various sizes for girls with sticks to beat them along the pavement. (See the image above.)

They also played leap frog. One person would bend over and the other would leap over them.

Another favourite game involved spinning tops. The tops were made of ordinary wood about 2 inches long and about 1½ inches in diameter, and the sides were grooved. A boy would have a length of string two or 3 ft long which he wound round the grooves. Then, keeping hold of the string, he would throw the top onto the pavement with a brisk jerk. This sent the top spinning on its metal peg at the bottom. Boys competed with their friends for how long a top would spin.

Popular games for girls, which could be played on the pavement were skipping and hopscotch.

For playing hopscotch the concrete paving slabs of the pavements could easily be marked out with chalk.

There were also popular indoor games, especially during winter months, like ‘Hide and seek’, ‘Musical chairs’, ‘Blind man’s buff’. ‘Hide and seek’ could also be played outside and it often ending up being a dirty game as people hid behind hedges and such like.

There were still treats for children to look forward to if your family could afford it. Trips to Madame Tussauds or the Zoo, or the Bank Holiday Fair on Hampstead Heath were very popular.

If they were very lucky children might be taken to the Hampstead Picture Play House to see a silent film like Charlie Chaplin in ‘The Floor Walker’.

Some children were lucky enough to get pocket money. Dorothy Baker who lived near Parliament Hill Fields recalls-

“…Thrift was a virtue in those far-off days. We children were allowed twopence a week pocket money. Of this one penny always went to the purchase of a savings stamp, which was …stuck in a special book. When we reached the magic figure of one shilling it was put into our Post Office savings account. The other penny was ours to spend as we wishes and it mostly went on sweets. A penny could buy two gobstoppers, 20 aniseed balls, two cut-cavendish tobaccos, two sherbert-dabs or an ounce of boiled sweets. There was a disreputable old sweet vendor who sat on the bridge over the railway selling his wares from a wooden tray. He was known as ‘Old Brandyballs’….. because it was these and bullseyes that he sold.”…..

“….he leaned over the wall and whispered that he had something to show me. In his hand was a matchbox lined with cotton wool, and in it – horror of horrors – was half a finger stained with mud and blood. “it’s the finger of a dead German soldier, and you must touch it,” he threatened. Greatly fearing, I put out my hand and as I touched the finger it sprang to life and clutched me! It was his own finger cunningly stuck through a hole in the box!…”

Lots of boys joined the Boy Scouts or the Church Lads Brigade to make new friends,learn new skills and have fun. Originally they probably met once a week. But as soon as War was declared the Hampstead Parish Church Lads Brigade began meeting in the Drill Hall in Heath Street (now the Everyman Cinema) everyday to volunteer for duties and the Scouts met every evening at 214 West End Lane for the same purpose. Many of them were too young to sign up to fight but they wanted to help people at home. For example they did guard duties, delivered messages and acted as air raid wardens to warn people to take cover during air raids. Read about the salvage activities of the Lad’s Brigade under the topic ‘Street Traders – Effects of the War’.

See more of what the scouts did on this exhibition website. 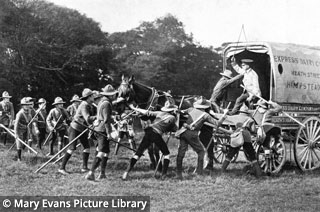 The boy’s groups also had fun as you can see from this picture where the scouts are ‘holding up’ an Express Dairy provisions van on Hampstead Heath.

Even school prize giving was affected by the War. In 1916 the London County Council abolished prizes as a war economy and instead children received prize cards.

Before the War Hampstead AFA (Amateur Football Association) used to have 8 teams that you could watch playing. But when young men went off to fight this fell to 1 team (source Hampstead and Highgate Express December 1914).

The Hampstead Boy Scouts Troop, knows as ‘The Firsts’ was one of the earliest to be formed in the UK. They with their Scout Leader Captain Colbron Pearce, took part, with the 1st SW London Troop, in the first inter-Troop competition to be held on Wimbledon Common in 1908. It included competitions in cooking, tent-pitching, fire lighting and tree felling. Do you think the Hampstead Troop practiced for on competition on Hampstead Heath?

Find out more about the games children might have been playing in 1914 http://www.1900s.org.uk/1900s-streetgames.htm