Community@War » The Home Front » Support for wounded soldiers in Hampstead

Support for wounded soldiers in Hampstead

Shortly after War was declared two military hospitals were set up in Hampstead to receive wounded soldiers. Later, to cope with the large number of the wounded, some wealthy individuals converted their homes into auxiliary hospitals and convalescent homes. But many people in Hampstead and the surrounding area were very generous in the way they supported the wounded soldiers in their midst. They answered every request from Matron and came up with all sorts of ideas of their own to build and maintain soldiers’ morale. 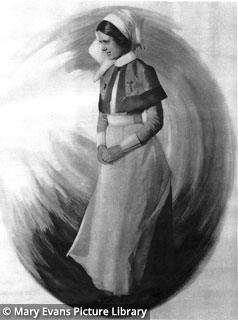 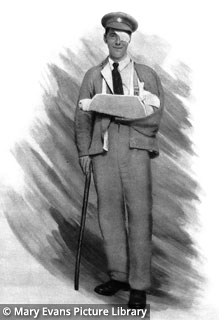 It didn’t take long for wounded soldiers to appear in the streets. The Hampstead & Highgate Express on 24th April 1915 reported –

“…Some of the horrors of the war were brought home to Hampstead residents shortly after one o’clock on Thursday when three disabled soldiers, all Hampstead men, were noticed making their way down the High Street within a few yards of each other. The first two were minus a leg and walked with crutches, and the third had one leg all distorted and walked with a stick…”

Wounded soldiers in military hospitals walking in the street could be easily identified because they wore a blue coat and trousers with a red necktie. These uniforms identified them as still being part of the army and under military discipline. You can see the uniform in this painting ‘Tea in a hospital ward’ by Stanley Spencer.

Hospitals were urgently needed for wounded soldiers soon after the fighting started. In January 1915 the New End Workhouse closed and its inhabitant moved out so that that it could become a military hospital. By May it already had over 300 wounded soldiers. And in March 1915 Mount Vernon, which had been a consumption hospital for those suffering from TB, also became a military hospital.

The Hampstead General Hospital near Pond Square (now the site of the Royal Free Hospital) also put aside beds for soldiers – which meant there were fewer beds for civilians who had fallen ill or been injured.

This picture of the King George V Military Hospital in London gives an idea of what a ward in one of these hospitals might have looked like.

As the number of soldiers increased people allowed their homes to be used as auxiliary hospitals or convalescent homes – for example in 1916 Rosslyn Lodge (the home of a Mr Hill) was equipped with 50 beds and Cedar Lawn (the home of Sir William Lever) was equipped with 65 beds. These hospitals were run by the Red Cross but were still under military control. They were equipped by the generosity of their owners and local residents.

Another hospital in the area was at Caen Wood Towers (belonging to Mr and Mrs Watson), which was a hospital for American soldiers supported by a Mr A S Cochran of New York. 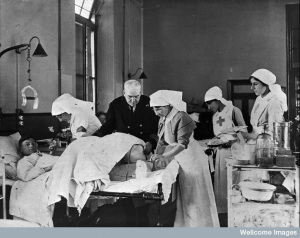 This image shows a doctor and nurses treating a wounded soldier.

Hospitals were staffed by trained doctors and nurses and by volunteers. The volunteers were part of the Voluntary Aid Detachment set up by the Red Cross (and known as VADs). They had first aid training but were not paid and had to work very hard. They did tasks like cleaning, driving ambulances and writing letters for soldiers. See Further Resources below for more information on VAD’s.

Concerts, outings and cups of tea

If you were a wounded soldier Hampstead was a good place to be; local people were very generous. Regular concerts were organised both at the Church Institute and in hospitals to entertain the soldiers. Community singing was popular and soldiers were encouraged to sing along for exercise.

Once soldiers started to get better they could go for walks in Hampstead. Hampstead Parish Church had a recreation building, which was called the Church Institute, in Perrins Court and soldiers were encouraged to use it. They could read newspapers or play cards or billiards, and there were competitions them. The Institute also organised outings – like the fete for them on Hampstead Heath in September 1915. Refreshments were arranged by the ladies of the parish who organised a rota to provide cups of tea. The vicar reported in May 1916 that in the previous two months they had served over 1600 cups of tea to soldiers!

Later as soldiers became fitter they were able to do other things. The Hampstead and Highgate Express during the War regularly carried items on treats soldiers had been taken on – such as drives, or outings to places like Madame Tussauds, or out to dinner. There were also trips to the theatre – in January 1916 some soldiers were taken to the first performance of the pantomime “Goody Two Shoes”.

People were also generous in providing other materials for soldiers. There were regular requests in the Hampstead and Highgate Express for books, magazines and games, or for soap, paper and envelopes for them to write home, or for sports equipment. The vicar of Hampstead Parish Church also posted requests in the Parish Magazine, such as this one in January 1916 (possibly for a Twelfth Night party). Do you think that some of the items requested were a bit unusual?

‘Soldiers in our midst…’Gifts of cakes, biscuits, plum puddings, crackers, toys, tobacco, cigarettes, sweets, fruit, scented soap, for the ‘stockings’ of the wounded soldiers at Mount Vernon Hospital, from members of the congregation will be gladly received by Miss Steele, the matron of the hospital, to whom they should be sent. Holly and greens for decoration, lilies and other flowers will also be welcome…’

The YMCA at work

The Young Men’s Christian Association (YMCA) was given permission by the government to act as a “friend of the Forces” at the beginning of the War, and it provided sports equipment, entertainment, and recreation huts for the troops at the Front. It also helped in the transport and care of relatives who visited dangerously wounded men; in photographing the graves of those killed in action for relatives; and in providing stationery for men to write home.

The Association also cared for men in training in the UK (see the Volunteering and training topic), and for those on leave or in hospital at home. In particular it provided accommodation for men passing through London (about 19,000 a week in 1918), and for wounded servicemen.

The YMCA have furnished a large recreation room at Mount Vernon Hospital to allow space for reading, writing, games and entertainment; illustrated lectures and classes for arts and crafts, such as have been so successful in other hospitals.

Gifts are requested to furnish it and provide games including bagatelle tables, a small billiards table, piano and gramophone…

Hampstead residents did what they could at Christmas to make sure that soldiers enjoyed the festivities. Some went into hospitals and gave concerts or sang Christmas carols. Others gave gifts, particularly cigarettes, books and warm clothing and food for the soldiers’ Christmas dinner. The Mayor, Alderman E A O’Bryan, set up a Christmas Appeal Fund for soldiers. People gave generously and in 1916 this Fund raised the equivalent of 5 shillings per soldier to give them a Christmas dinner and other luxuries. This is equivalent of nearly £20 in today’s money. That Christmas there were over 400 soldiers in New End Hospital and over 220 in Mount Vernon. In addition to this the Mayor, from his own pocket, gave every soldier a gift of cigarettes. In 1916 nearly all men seemed to smoke!

…at New End all the wards were elegantly decorated by soldiers and staff. They all represented “Japan” flower gardens. Charming colour schemes were carried out in some of the wards. One was red and black, with sunflowers, poppies and roses; another white and yellow, with daffodils, roses and chrysanthemums.

The first prize went to Ward 41 which represented “Two Seasons” – winter and spring – there was a very ingenious and wonderful snow storm facing visitors at the entrance to the ward, while inside was a scene of warmth and brightness with decorations in pink japonicas and pink roses.

..The second prize for the most novel decoration went to ward 33 – one of the patients – Pte Bennett – had decorated the walls with original pictures made out of cotton wool and blankets …

The role of Matron

Matron was a very important person in the lives of wounded and convalescing soldiers. This very important lady at the Mount Vernon Hospital (after it became a military hospital) was called Sister Willes. Later this role was taken over by Miss Steele. Along with ensuring that their wounds healed Matron also wanted to ensure that the soldiers in her care were comfortable and kept cheerful and stimulated , as this would speed their recovery. While the basic necessities were provided by the government she also relied on the generosity of the people of Hampstead for the ‘extras’. And neither Matron was afraid to ask.

For example, when Mount Vernon first opened, Sister Willies said she would be glad of some bed tables on castors to slide over the beds. Anyone who has been in hospital as a patient or a visitor knows that now such tables are supplied by the hospital. And she also asked for some flower-pots for the plants which decorate the wards. She wanted the place to look nice.

Matron was also very practical. The vicar of Hampstead Parish Church was also the chaplain at the Mount Vernon Hospital. Through the vicar Matron was able to ask parishioners for items that were needed. For example, she asked people to lend old greatcoats which could be worn when soldiers were taken out for drives, to keep them warm. Matron kept a stock of such coats to lend out when they were needed.

Another important role was to record each gift and make sure each donor was thanked, so that they would know their gift was appreciated (and might give again). Looking at all the gifts described in this section this would have taken her hours in addition to her regular duties. A sadder duty she had was to write to the families of soldiers who had died while in the hospital, and to try and find something reassuring to say to them.

A lot of soldiers caught Trench Fever. The chief symptoms were headaches, skin rashes, inflamed eyes and leg pains. Most patients recovered after five or six days, although some had to stay in hospital for several weeks and some died of heart failure. The cause of Trench Fever baffled doctors. In 1918, doctors at New End Hospital identified the cause of Trench Fever – secretions from lice in the trenches – in other words, lice poo!  The disease was transmitted via the bites of body lice. These were a problem because often soldiers couldn’t change clothes for several days and washing facilities were limited.

The Workhouse – the story of an institution http://www.workhouses.org.uk/Hampstead/ This site describes the development of the New End workhouse which later became a military hospital in World War One. It also has photographs of the building before it was converted into flats.

Chapter 2 of ‘Wartime Camden: Life in Camden during the first and second world wars’, (see reference under ‘Sources’ below) has photographs of Rosslyn Lodge in Lyndhurst Road, Hampstead which was an auxiliary hospital.

British Red Cross http://www.redcross.org.uk/About-us/Who-we-are/Museum-and-archives/Historical-factsheets/Nurses-and-hospitals This page describes auxiliary hospitals set up by the Red Cross in the First World War. Also have a look at the blog on the site.

Lost Hospitals of London http://ezitis.myzen.co.uk/cedarlawn.html This page has details of the Cedar Lawn Hospital

Lost Hospitals of London http://ezitis.myzen.co.uk/newend.html This page has information on the history of New End Hospital

National Trust – Dunham Massey http://www.nationaltrust.org.uk/dunham-massey/history/ During World War One the National Trust property Dunham Massey became the Stamford Military Hospital. The pictures on this site will give an idea of what the auxiliary hospitals in Hampstead might have been like.