Remembered with Honour: The Great War Fallen of Hampstead St John Burial Ground Download ebook
These pages tell something of the hundreds of men and boys from the local community that answered the call to fight for their country.

Gifts from Home – people at home would be keen to know what soldiers needed and gifts were a connection with home.

Local Regiments – The local regiments were an important recruiting vehicle for young men and Hampstead Heath was an important training ground for soldiers, not only from Hampstead.

You can search for details of Hampstead men and boys who went to war and died, using the search function and on the right hand side of the page.

The names of the soldiers were taken from the War Memorial in Church Row, from the Parish Magazine and the Hampstead Parish Church burial records.

Letters to local boys at The Front

Tips for the trenches

“The boys are away for Christmas”

Sydney Charles Shipston is away at war playing his old game of cricket. He has had success because he has hit the wicket a lot of times giving the enemy what for!…..

When we spoke to Sydney’s mum she said ‘that Sydney’s love for cricket was extreme and she was proud of Sydney’ for helping the war.

Now at war he is in the front line with his troops representing his country.

A merry Christmas Sydney and keep those bowls coming fast and furious for England.”

The open letter was accompanied by this drawing – 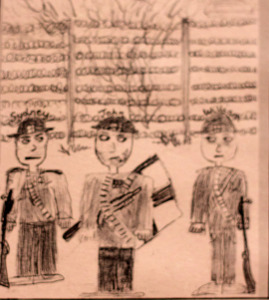