In the Remembrance ceremonies and services each November 11th we repeat the promise “We will remember them”. Yet as time passes we forget who, exactly, they were – inevitably. We have tried to re-tell some of the stories of individuals so that our annual promise is not an empty one. You can search for details of 139 Hampstead men and boys who went to war and died, using the search function at the top of the screen. Or you can search by year of death or action on the right hand side of the page. 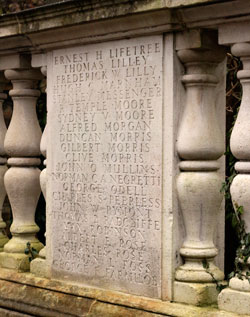 The names of the soldiers, sailors and airmen we have included were taken from the War Memorial in Church Row and the Hampstead Parish Church burial records, which include details of names added to gravestones in memory of family members buried elsewhere. Names were also taken from the monthly Hampstead Parish Church Magazine which, between August 1914 and December 1916, published a roll of honour in each edition. This was compiled by the Senior Curate, who also lost a nephew in the War. The roll of honour wasn’t published after 1916, possibly because of the shortage of paper and possibly because no-one took on the responsibility after the originator moved to another post.

We have been unable to discover why some names were included on the War Memorial in Church Row and others weren’t. One possibility is that individuals had to have a close connection with the church. Another is that their names were expected to be included elsewhere, and that there was a policy of avoiding duplication – the borough put up its own memorial at the Whitestone Ponds, although eventually did not include individual names. This is only speculation because the papers of the War Memorial committee are silent on the issue of selection.

Biographical and military details of each of the dead is based on Commonwealth War Graves Commission records; unit war diaries; national Census records, and Commercial Directories of Hampstead for 1910 and 1921.

The amount of information on each soldier varies according to whether we can identify them reasonably accurately in these sources. For example, for some soldiers details of their unit or the action in which they were killed has not been found. For others the military record only shows where they died, e.g ‘Belgium Flanders’, ‘French Flanders’.

Not all the names of Hampstead men and boys who went to fight are included and there are other war memorials in Hampstead; please send us details of others who you would like to be included on this site and we will research them. We would particularly like to hear from anyone with more information on any of the men we have researched, whether to correct or expand on what we have found.