Food at the Front

Providing food for all the Men at the Front, particularly in the trenches, was a big challenge. A total of 3,240,948 tons of food was sent from Britain to the soldiers fighting in France and Belgium. The British Army employed over 300,000 field workers to cook and supply the food. Although for many poorer soldiers the food was better and more plentiful than at home, and they even put on weight, food was often unappetising and sometimes scarce. 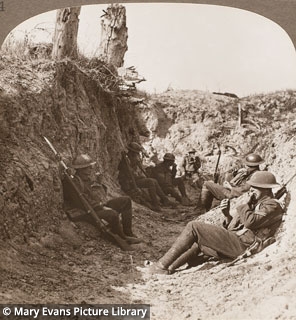 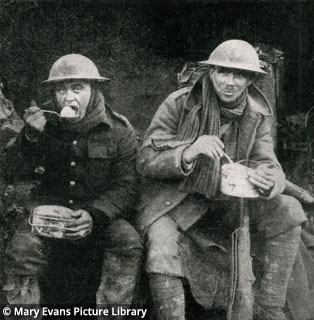 Did soldiers get enough food and what was it like?

At the beginning of the War the British soldiers were quite well fed. They were given 10 ounces of meat and 8 ounces of vegetables a day. But as the number of soldiers grew, food was often scarce and men went hungry, especially if the Germans successfully bombed the food supply lines. By 1916 food rations had been cut to 6 ounces of meat a day. However the Army tried to give the soldiers something special at Christmas. The picture on the right is from Christmas 1916 and it looks like the soldiers are enjoying their meal.

Much of the food was sent from England, and the strain on supplies was unsustainable. The daily bread ration was cut in April 1917. And, later on, troops not in the front-line only received meat on only nine days a month.

Often meals in the trenches consisted of bully beef, bread and biscuits, but by the winter of 1916 wheat flour was in such short supply that bread was being made with dried, ground turnips. The main food became a pea-soup, to which sometimes the troops could add a few pieces of horsemeat. Kitchen staff became more and more dependent on local vegetables and had to use weeds (such as nettles, which are very nutritious) to flavour soups and stews. What do you think of this recipe for trench stew?

What is bully beef?

Most of the meat was supplied in tins, rather than fresh. It was mainly minced beef, cured with ‘corns’ of salt to preserve it. It is still available in shops today, and is known as corned beef. The important thing is that it can be served cold. While it is nutritious and tasty, if you are a soldier and you are getting it every day it could be a bit boring!

How did it get the name ‘bully beef’? In 1914 corned beef tins were originally labelled in French because the product was tinned and labelled in Marseilles. They were labelled ‘Boeuf Bouilli’, or Boiled Beef, and the English pronunciation of this became ‘bully beef’.

One way of feeding men and providing them with enough nourishment was to feed them with biscuits that will last a long time. Soldiers called these ‘hard tack’ or ‘dog biscuits’ because they were so hard! They weren’t very popular and they often had weevils in them. The best way to eat them was to crumble them into tea. Here is a link to a recipe for hard tack biscuits.

How did the cooks get food to men in the trenches?

Have a look at the photo on the left of soldiers sitting around in trenches. Can you imagine trying to serve food in these long trenches?. The catering staff put the food in dixies (cooking pots), petrol cans or old jam jars, and carried it in straw-lined boxes to try and keep it hot. But by the time the food reached the front-line it was always cold. Eventually the army moved the field kitchens closer to the front-line, but they were never able to get close enough to provide regular hot food for the men.

Sometimes a small group of soldiers managed to buy a small primus stove between them. When they could obtain the fuel, which was always in short supply, they could heat their food and brew some tea. To try and make the food more interesting men would break up their biscuits, add water and anything they could find to eat, and heat it up in their canteens or mess tins. (You can see a mess tin in the photo on the right.)

Letter from a Hampstead soldier

Arthur Green, a soldier in the 1st Coldstream Guards, wrote to his friend ‘Tich’ Baylis in Hampstead in 1915 –

” Dear Tich – Here we are still alive and kicking and in the best of spirits….We went straight to the trenches the day after we arrived at the base and have been in and out of the trenches ever since. We do 48 hours in and 48 hours out…..

…We get pretty good grub considering; the only thing we are short of is bread, but to make up for that we have a box of biscuits every day between us; when we are in the trenches we have bully beef and pea soup in powder form served out to us, so we forage around for vegetable and you can bet we don’t come back empty handed …. if we don’t get all these we get some: potatoes, leeks, carrots, sprouts, sage and anything else that we think will do for the ‘Filling up Stakes’.

The day before yesterday (March 22nd) my chum and I thought we would like some jam duff, so we got a lot of bread crumbs and put them into our canteens and boiled them till they were soft, and then put half a tin of jam on the lot; but unfortunately we did not know that the crumbs were full of hairs and little bits of cinders, so all the lot had to be thrown away …..”

Another amusing letter about food appeared in the Hampstead and Highgate Express on 12th January 1918 from a Sapper (ie. a soldier in the Royal Engineers) stationed in the North of Italy –

“…It will soon be Spring here – the temperature is higher than for weeks. The locals cultivate grapes and grow maize between the vine rows. Maize is the staple – ground into a powder, boiled until it forms a dough, and eaten with meat or as a pudding – called Polenta. Our boys like it with jam, as bread and jam. The wine seems to be taken as our tea is drunk…” (i.e they drink wine like we drink tea!)

Did you know that ‘a wet and a wad’ was an expression used by soldiers to refer to a cup of tea and a bun or sandwich.

‘First World War – Tinned food, maps and watches’ http://www.youtube.com/watch?v=iITm4OM80YQ (The first part of this clip deals with food in the trenches.)

‘Rations in the age of Empire: British rations 1880 to 1918’ http://17thdivision.tripod.com/rationsoftheageofempire/id5.html (In addition to the interesting text there is a photo of a Tommy’s rations.)