A soldier’s life at the Front was difficult. Trenches had to be patrolled in all weathers, so men were cold, and the trenches were often waterlogged and muddy. Gifts were important to relieve the boredom, provide comforts and variety in their diet and, in the case of wounded soldiers, to provide necessary medical supplies. Gifts also reminded soldiers they were remembered and appreciated at home. 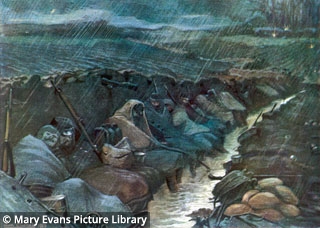 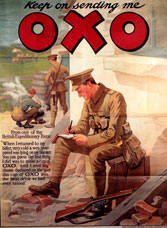 Day to day life in the trenches

Monotonous – Soldiers weren’t fighting all the time and there was a lot of sitting around doing routine and often boring jobs like weapon cleaning, moving food and equipment along the trenches, repairing barbed wire and delousing your uniform. To make it worse the food was often very unappetising. Read more under the topic ‘Food at the Front’ and in this description of life on the front line.

Dirty – Men at the front had few changes of clothing and limited washing facilities. An officer writing home in 1915 said “it was gorgeous to have a wash and a clean shirt, after hardly undressing at all for 12 days …”!

Uncomfortable – Infantry soldiers spent a lot of time in trenches and in all weathers (see the picture on the left).Trenches were often water-logged and muddy, because when it rained there was nowhere for the water to drain off. Many of the British trenches were on low ground and only a few feet above sea level so water was not far from the surface.(See the description below of trench foot.)

Frightening – Front line soldiers were expected to advance across no man’s land towards the enemy frontline trenches, in the face of shelling, machine gun fire and barbed wire defences. You or one of your friends may be wounded or killed. If you weren’t advancing you still had to listen to the sound of guns and other artillery.

Have a look at a short video clip of life in the trenches.

However humour was never far away, even if it was sometimes very ‘black’ (see the image above on the right). Gifts from home would help to cheer up soldiers.

Woollen socks and the curse of trench foot

What was trench foot? Many soldiers fighting in the First World War suffered from trench foot. This was an infection of the feet caused by cold, wet and insanitary conditions. In the trenches men stood for hours on end in waterlogged trenches without being able to remove wet socks or boots. Sometimes soldiers didn’t change their clothes for a couple of weeks.

In 1914 socks were made of wool. Wool is warm in winter but if woollen socks become wet they take ages to dry out. To prevent trench foot socks needed to be changed regularly and properly dried out.

There were regular requests to family at home for good, thick, soft, long woollen socks, especially in winter, because there was the threat to soldiers of both trench foot and frost-bite!

The demand for woollen socks from the Front was almost unlimited. Everyone was encouraged to knit socks for the men at the Front including school girls. The cartoon on the left shows a man doing his bit to help the ladies knit!

Have a look at this picture and another picture showing the awful disfigurement caused by trench foot. A lot of the soldiers who were in hospital in Hampstead were there because they were suffering from trench foot. (See an interesting fact about trench foot in ‘Support for wounded soldiers in Hampstead’.)

Books and a soldier’s connection with home

Books and games helped to relieve the boredom, both for soldiers in hospital and in the trenches. The Chief Librarian of the Hampstead Public Library regularly put out requests in the local newspaper for books and games. On 27th October 1917 he asked the paper to publish a thank you letter to everyone who had generously donated books and said that, through the donations of the people of Hampstead, he had been able to send nearly 9,000 books to soldiers and sailors who were fighting at the Front.

‘You will all be interested to hear that a box of books has reached the Battery. It contains some nine or ten old Belsize withdrawals. Lord! It threw me back months. I little thought when I handled these books last that I would meet them again within the sound of Hun rifle shot. They are most acceptable and have been distributed throughout the Battery.’

From as early as December 1914 books were also sent to men who were Prisoners of War. They must have felt very far from home, but receiving gifts like these would help them to know people were thinking of them and hoping for their safe return.

People at home wanted to do what they could to help wounded soldiers at the Front. All sorts of groups set up working parties to make items that were needed. One such group was set up by Mrs Deane, the wife of the Vicar at Hampstead Parish Church. This group was called ‘The War Working Party’ and it met every Wednesday in the Vicarage. By the end of July 1915 they had sent over 2104 items to 3 Clearing Hospitals at the Front. This included small back cushions made by girls from Hampstead Parochial School.

Some of the items may seem unusual to us today and other items were very practical. For example they made cloth bags measuring 8 inches by 10 inches for wounded soldiers to put their personal belongings in. The War Working Party also sent out pillows, operation socks, ordinary socks, slippers, pyjamas, bed jackets, dressing gowns and ‘day shirts’. All of these items were requested by Matrons at field hospitals and gratefully received. By March 1916 the working party had sent out over 6,500 items!

Where did they get the material from to make these supplies – donors gave cloth, wool and money to buy other items needed.

Some of the gifts sent to wounded soldiers at the Front were from individuals. For example Mrs Deane sent acid drops to several hospitals. She received letters of thanks from Matrons in the different hospitals, saying how much they had been appreciated by soldiers whose tongues were dry from illness and who therefore enjoyed sucking them.

Other people sent gifts in response to specific requests – for example the 10th Battalion London Regiment asked the Hampstead and Highgate Express to publish a letter requesting a gift of a gramophone “to entertain troops when they are sitting around between bombardments.” And gifts of cigarettes and tobacco were always appreciated.

Matrons in field hospitals at the Front worked very hard. Not only did they have to look after all the wounded soldiers and the nurses, but they also needed to send a thank you letter for every gift or parcel of gifts received. Can you imagine Matron at the end of a tiring day sitting down to write thank you letters? They knew that people who sent gifts would want to know that they had arrived safely and had been appreciated and put to good use. And grateful letters would encourage people back home to continue to send gifts.

The thank you letters to the War Working Party in Hampstead included some personal details. For example –

‘…A colonel, who was admitted just as the post arrived, is already wearing one the suits of pyjamas…..’

‘…One patient, who is returning to the trenches today, was very delighted with a pair of socks and is writing to you himself….’

‘…we do appreciate the work your party are doing for us. It not only adds to the comfort of the soldiers, but it also lessens and lightens the work for us…’

Letters home were also an opportunity for Matron to request items that were badly needed. For example, in the summer of 1917 the War Working Party received a letter from a Matron at one of the field hospitals asking for Japanese umbrellas (ie sunshades)! She said they were needed to put over the heads of the men who could lie out of doors in their beds. In her thank you letter she said ‘I wish you could see the patients lying out in the garden with them over their heads. They look quite jolly…’

Oil made from whale fat was rubbed into the men’s feet in the trenches as a way of water-proofing them to prevent trench foot.

‘Oxo’ cubes were distributed as part of the soldiers’ rations as a way of giving soldiers meat and nourishment. Oxo used this as part of its advertising campaign, as you can see from the poster above.

Did you know that in 1914 the cost of a stamp for a letter was 1d (one old penny, that is 4/10 of today’s penny)? For that, letters were delivered to the front, and replies collected and sent home. The cost per letter today is between 50p and 60p, depending on how quickly you want it to be delivered.

The British Postal Museum Archive http://www.postalheritage.org.uk/page/lastpost (particularly the sections on delivering mail to the Front and censorship)