When war was declared the country quickly realised that it needed a lot of men to join up to fight. There was a big poster campaign and all sorts of people joined in to help recruitment, including musical hall stars. The posters were everywhere and Hampstead men joined a number of different units. Hampstead Heath was a useful training ground for new recruits, who often had to wait for proper uniforms and equipment. 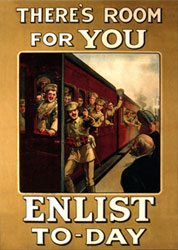 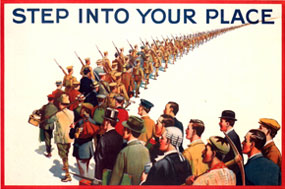 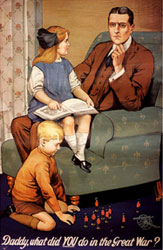 Images above courtesy of the Advertising Archives

Volunteering for the Forces

From the outbreak of war onwards there was considerable social pressure on men to join up. In the week that war was declared, the Mayor encouraged residents to volunteer for the armed forces, or for other units like the Special Constabulary (police), or the Red Cross/ St John ambulance services. The Hampstead and Highgate Express reported an influx of recruits – including architects, a solicitor, an opera singer and an author. At the Borough Council meeting in mid December, the Mayor announced that “about 140 men from the Borough’s staff were now with the colours”; UCS school reported that 394 “Old Gowers” had joined up; and a Hampstead Cadet training battalion had provided another 450.

Every high street had posters like the ones above encouraging people to enlist, and every High Street had a recruitment office where men could join the army (infantry or artillery) or the navy. There were often recruitment rallies with flags and bands playing patriotic songs to encourage men to join. This short video gives you some idea of the pressure young men were under to fight with the armed forces (including the musical hall song ‘Your King and your country want you’).

Three hundred thousand men joined up in the first month of the war and, on a single day in September 1914, thirty-three thousand men enlisted. In Hampstead young men volunteered in their thousands. The unit a man joined depended partly on which service or regiment was he attracted to, and partly on which units were recruiting in the area at the time. Hampstead men joined a wide variety of units:

All these units were initially manned by a mixture of serving regulars and reservists (like the Territorial Army). But from October 1914 onwards they were supplemented by volunteers. Reports of local men being killed at the Front encouraged men to volunteer (like the one below reported in the Hampstead and Highgate Express on 19th December 1914).

Charles George Miles, a Private in the 1st Battalion, Middlesex Regiment, was buried this week in the first military funeral at Hampstead Cemetery. From a West Hampstead family business, he was a professional infantryman and had served in the Boer War and India before going to France and Flanders. He died of wounds receivedat the battle of Ypres.

However as the war continued there were not enough volunteers and conscription was introduced in January 1916 which forced men to join up.

Infantry and the Pals battalions

Arguably the “Poor Bloody Infantry” had the deadliest role of all. Life in the rain and mud of the trenches was difficult enough, without the constant noise of the bombardments and the fear of sudden attack as well. Not only were casualty levels extremely high, the infantry also shouldered the burden of much carrying and labouring work (see a description of the Pioneer battalions in the story of Carl Bingen in the topic ‘Stories of Eight Soldiers’).

Lots of men were needed and the War Office realized that local ties could help recruitment – more men would enlist if they could serve alongside their workmates, friends and relatives and not just people from the same area. Several units – called Pals Battalions – were recruited on this basis. Many of the Pals units sustained heavy casualties, which had a significant impact on their home communities.

Two units, however, had particular advantages in recruiting in Hampstead. The National Reserve had a Territorial unit based at the Harben Armoury in Pond Street from the early 1900s. The 1st Cadet Battalion, Royal Fusiliers was also based there to provide basic training to youngsters. By December 1914 it had trained 450 cadets and transferred them into the Regular Army.

TheMiddlesex Regiment had a Territorial unit(“the Hampstead volunteers”)based at the Drill Hall in Heath Street/ Holly Bush Vale (built in 1888 where the Everyman Cinema is today). The local unit of the Church Lads Brigade, which shared their quarters, became a regular source of recruits for the army.

How the army was organised – divisions, regiments and battalions explained

“The war of 1914-18 was an artillery war: artillery was the battle-winner, artillery was what caused the greatest loss of life, the most dreadful wounds, and the deepest fear”.

During World War One the Royal Regiment of Artillery comprised three main elements:

The artillery was so popular that Hampstead raised units (i.e batteries) of both Horse (light) and Garrison (heavy) Artillery. These men had a range of skills in addition to serving the guns, which included driving and caring for horses. (A large number of horses were commandeered in Hampstead to support the war effort.).

The “light” artillery unit was a local company of the Royal Horse Artillery, which became known as the “Hampstead Howitzers” after the type of gun that they had. Click here to see an image of a Howitzer gun firing (it is painting 7 of ‘Painting of life along the Western Front). The 183rd (Hampstead) Howitzer Brigade numbered 700 men, divided into 4 batteries. This unit was filled in less than 4 weeks. By September 1915 the “Hampstead Howitzers” had moved into camp in Golders Hill Park. The YMCA Rooms in Finchley Road were opened to provide recreation for them.

After the Howitzers came the two Heavy Batteries the 138th and the 139th (Hampstead) Royal Garrison Artillery. These consisted of some 600 men who volunteered in Autumn 1915. The 138th Battery soon became known as the “Hampstead Heavies” and most of its initial training from October 1915 to March 1916 took place on Hampstead Heath. The Hampstead Heavies probably got their name from the big field gun that was part of their equipment. You can find out more about them from their website . (This was dangerous work – of the 200 officers and men in one battery who landed in France, only 1 officer and about 30 other ranks were left when the last round was fired.)

Training and Refreshments on Hampstead Heath

With its wide open spaces away from houses for drilling, its trees for camouflage and its hills for climbing, Hampstead Heath was an ideal space for training troops. As well as being useful for local battalions it was also useful for battalions raised in central London who didn’t have access to as much open space. Below are links to images on the Imperial War Museum website, showing troops training in Hampstead and on the Heath (you can click on the images to enlarge them) –

http://www.iwm.org.uk/collections/item/object/205025732 – (In this image men are training in their own clothes because the army didn’t yet have sufficient uniforms to give them.)

“….In the early days of the 1914-18 war the Parliament Hill Fields were used as parade grounds for training the troops. I have a very clear memory of watching teams of horses pulling gun-carriages, racing up and down the hill in practice for the battle across the Channel. I am not sure how many horses pulled one gun, but think it was four, and the driver must have been mounted on the leading right-hand horse, for there was certainly no seat for him on the gun carriage….”

For men training on the Heath it was often difficult to get lunch and refreshments. The YMCA (a charity that still exists today) erected a large marquee near the Vale of Health. It was open to all men in uniform. It had floor boards and radiators to keep men warm when it was cold. And it had a platform which men could use for singing. Community singing was very popular – especially of patriotic songs like ‘It’s a long way to Tipperary’ and ‘Pack up your troubles’ (this clip also shows recruitment and training of soldiers). Everyone needed to keep their spirits up and singing songs was a good way to do so.

Food, tea and coffee was all made and served by local volunteers and the cost of fitting out the facility was met through local fund raising.

The Hampstead and Highgate Express on 15th January 1916 records –

(Yesterday) 150 soldiers were served with luncheon and entertained to half an hour’s music at the new YMCA tent near the Vale of Health….So expeditiously were they served and waited upon by the voluntary lady workers that the whole function only occupied an hour..

… that in the previous four month period over 20,000 dinners had been served in the YMCA marquee.

This was quite an achievement for the lady volunteers!

The opposing contingents of the National Volunteers from the Hornsey district were ranged against one another for the attack and defense of Hampstead Heath last Saturday night. Everyone was keen. A sharp lookout was being kept by the defenders for the least sign of the approach of the enemy, and any attempt to break through. Some skirmishing had taken place, and a few prisoners were captured. Everything was going well, and the attack was at its height when orders were given to cease operations and take the prisoners down to the YMCA marquee.

What had happened? Had this recently erected rendezvous for the use of troops been commandeered as the prison and the seat of judgment for the unfortunate attackers who had fallen into the hands of the defenders? If not why were they being sent to the YMCA marquee?

The distant sounds that were heard were like an army rejoicing over the spoils of victory, and the prisoners were wondering what awaited them. The nearer they got to the marquee the greater the number of soldiers hurrying forward. The moonlight revealed friend and foe making for the same centre until in the congestion at the entrance the prisoners lost themselves in the crowd. But what a change! Instead of a place of judgment it was a place of refreshment and entertainment – marquee lit, food, drink, music and singing. So much noise it was heard at Spaniards and the police came down to see what was happening.

After great fun the troops marched back to Hornsey and Wood Green.

Chapter 1: ‘For King and country’ in ‘Wartime Camden: Life in Camden during the First and Second World Wars’, compiled by Valerie Hart and Lesley Marshall , published by London Borough of Camden Libraries Department

‘Conscription and Recruitment in WW1: did everyone want to be a hero’

http://www.youtube.com/watch?v=GYO-NuoXDVk with a musical accompaniment ‘I don’t want to be a hero’ ; this shows a lot of WW1 posters