Remembered with Honour: The Great War Fallen of Hampstead St John Burial Ground Download ebook
In 1914 most homes had coal fires to provide heating and many didn’t have bathrooms or hot water. The outbreak of war added to the strains on the working class housewife already struggling to feed her family. 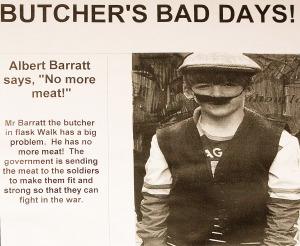 Food, eating, shopkeepers and shortages – looks at eating habits, feeding the population after the War broke out, and how shopkeepers responded to the challenges of keeping a food business going – including the butcher. 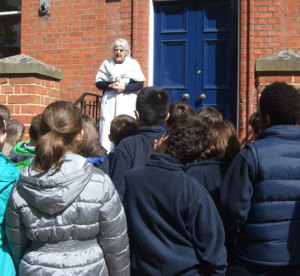 Housework and keeping clean – few people had bathrooms or hot running water. On the tours children were ‘introduced’ to a lady in the community on her way to use the Wells and Campden Bath and Wash house who told them all about the facilities

Other voluntary work to support the war effort – including the Hampstead Tank, an ingenious fundraising device

Food and shortages – the subject of food encouraged a lot of creativity from posters encouraging people to save food, and to war time recipes such as sugarless sweets to ‘help rationing blues’. 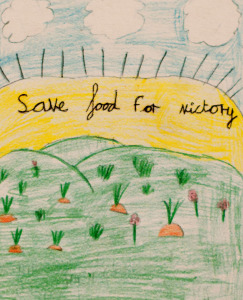 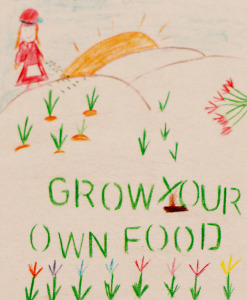 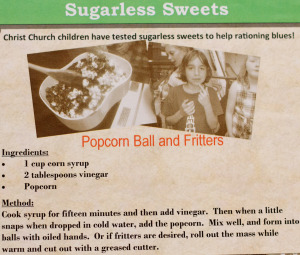 Allotments were also advocated. Year 2 at Christ Church encouraged people to grow their own food in an article entitled ‘Allotments are the answer’ “ Instead of eating meat and bread try keeping yourself nourished with fresh fruit and vegetable. Why not even grow your own!….Simply plant, water and watch them grown..” and they did too!..

Soldiers letters – Year 4 at Hampstead Parochial School wrote very imaginative and thoughtful letters from hospital……..Soldier Han wrote this ‘to my lovely family’ “I was in the battle field fighting, then a bomb exploded and I found myself in a hospital.

When I was in the hospital for the first time I was frightened and scared, because I thought everyone will not be nice to me because I got injured. But the nurses changed my mind quickly, every nurse will ask me how I’m feeling, especially the nurse looking after me…. I don’t feel frightened or scared now, I feel joyous.

Don’t worry about me because I will soon be OK and I feel at home in the hospital, I will soon come home…”

Matthew in year 4 in a letter to his ‘dearest nurse’ – in it he said he was “ petrified that a stranger was taking care of me, but I guess it was OK, you never left me behind. You used to tell me bad jokes but I would still laugh. You always had a smile on your face for me….” 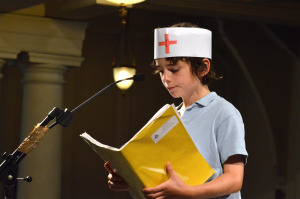 The image is from the concert and is a nurse reading a letter to a wounded soldier.

Matron was a very important person in each hospital andYear 4 at South Hampstead in their paper the Daily Wardian carried an interview with the matron Sister Willies at Mount Vernon (a TB hospital before it became a military hospital). One of the questions asked was why she decided to become a matron – She told them that “As a child growing up my mother became very ill. Later on we realised that she was suffering from tuberculosis. That triggered my urge to study medicine and become a nurse. When I was 13 my mother passed away and on that very same day Mount Vernon hospital was looking for new staff and I applied.” 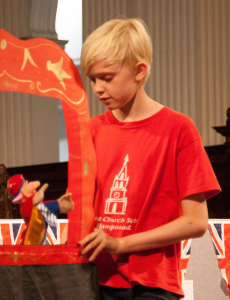 The Flask Pub Christmas Party – Local people appreciated that children would be missing their fathers and that fun was in short supply. At Christmas the publican at the Flask pub at the end of Flask Walk Mr Montague Rowland Fitzwilliam put on a party for the children of New End. There was lots of food and games as well as Father Christmas and Punch and Judy. At the Concert Christ Church recreated the Punch and Judy show!

A number of children wrote diary entries of the event or letters to brothers or fathers at the front telling them about the party. E.g Ganesh wrote to his brother Harry…”My friend Miles and I had the most dreadful tummy from eating too much cake and sweets. I wish you could be with me Harry. Father Christmas was there and you would have been so shocked if you saw him, but you’re in hospital so you couldn’t come…”

Emila wrote in her diary “…Father Christmas asked what we wanted for Christmas. I asked for everyone to have a happy family and for nothing bad to happen in the war…..I had lots of cakes and sweets……My father should be back with a late Christmas present soon, he said he’s be back by New Year. I do hope so……I wish father was home with me”.