Other voluntary work to support the war effort

People in the community wanted to do what they could to support the men and boys fighting the war. At the War Hospital Supply Depots they made and put together vital materials to be sent to the Front. Fundraising for the war effort was also important. Tank Days were held to try and encourage people to buy war bonds. 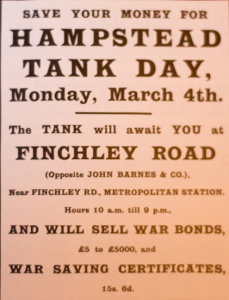 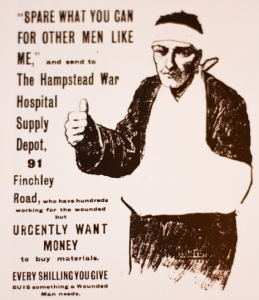 Volunteers making vital supplies for hospitals at the Front

Every borough was asked at the beginning of the War to set up a War Hospital Supply Depot. Have a look at the advertisement above for the Hampstead War Hospital Supply Depot. Similar adverts were placed regularly in the Hampstead and Highgate Express by the Depot – either asking for volunteers to work there or asking for money to buy supplies. Lots of people were needed, as you can see in another advertisement (below) placed by the Depot in January 1916.

The requirements of the various war hospitals for surgical bandages, dressings, etc are constantly increasing and notwithstanding the splendid response made by the Women of Hampstead to our previous appeals, we are unable to execute all the work that is necessary.

The average attendance is 200 per day but we have room and employment for more. Every woman who can spare even a few hours a week will be welcomed.

Let your New Year resolution be to work for the wounded at the Hampstead War Hospital Supply Depot 91 Finchley Road …..

What did these volunteers make at the Depot? They made – carbolic vests, slippers, pyjamas, night shirts, operating socks, covered wrist splints, covered elbow splints, chest bandages, operating sheets, pillow cases…… so many different things. In 1916, for example, over 42,000 articles were made.

It was so important to motivate volunteers to do this work that the Queen visited three depots – in St Pancras, Islington and Holborn – in December 1914 to encourage them.

The war was costing the government an enormous amount of money. One estimate, in a speech by a local MP in October 1918, suggested the total cost of the War to Britain was over £8 billion – as much as the total tax revenue the government had received in the whole of the 19th century (Hampstead and Highgate Express, 12th Oct 1918). The government therefore needed to raise lots of money. It increased Income Tax in December 1914, but this wasn’t enough.

The government therefore encouraged people to lend it money, which it promised to pay back when it could. It did this by selling War Bonds and Savings certificates, equal in value to the amount that individuals lent to the government, at special rallies and fund raising days in each area. To encourage people to come these were called ‘Tank Days’ and the army would bring along a tank for people to see. Tanks were quite a new invention, and they were big and very impressive, so people were curious to see them. The purpose of bringing the tank along was to say ‘if you raise enough money by buying Bonds and Certificates you will be paying for a tank to help fight the War’.

There is an advert for the Hampstead Tank Day above. You can see from the advert that the tank was parked opposite the Finchley Road underground station. It must have held up the traffic! Look under Further Resources to find out where you can see a picture of the Hampstead Tank. Gerald du Maurier, who was a famous actor and Hampstead resident, is standing on top of the tank!

Chapter 4 of ‘Wartime Camden: Life in Camden during the First and Second World Wars’, compiled by Valerie Hart and Lesley Marshall , published by London Borough of Camden Libraries Department, has a picture of the Hampstead Tank and more information on War Bonds.